Since Israel’s minister of defence designated six Palestinian NGOs because of their links to the PFLP terrorist organisation in late October, BBC coverage of that story (see ‘related articles’ below) has focused on the uncritical amplification of talking points from interested parties, including the NGOs themselves and some of their international partners.

On November 17th the BBC News website published yet another report in the same genre which went under the headline “Artists denounce Israeli ban on Palestinian civil society groups”. 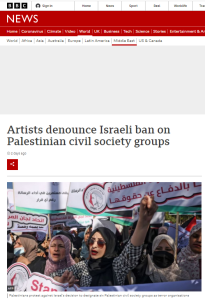 The ‘news’ the BBC sought to communicate in that report was that a group of people, who have no expertise whatsoever in the fields of security, counter-terrorism or terror financing, object to Israel having designated those six Palestinian organisations.

Apparently, the sole reason the BBC believes that the opinions of those particular people are worthy of amplification on a platform reaching audiences worldwide is because they are “high-profile figures, including musicians and authors”.

While the BBC’s report promotes a link to and quotes from the statement put out by the BDS supporting group ‘Artists for Palestine UK’, it does not advise readers of the long records of anti-Israel activism of some of its signatories such as Roger Waters, Ken Loach and Brian Eno.

The report recycles a paragraph also found in an earlier article by the BBC Jerusalem bureau’s Yolande Knell which whitewashes the past two decades of PFLP terrorism.

“The PFLP, a small, left-wing faction that does not recognise the State of Israel, carried out a number of armed attacks and aircraft hijackings in the 1960s and ’70s. It was also behind several suicide attacks during the second Palestinian intifada in the early 2000s.”

As was noted here when Knell used the same wording, that description obviously suggests to BBC audiences that the PFLP has not carried out any terror attacks in the twenty years or so since “the early 2000s”, which of course is not the case.

Perhaps if the BBC Jerusalem bureau had bothered reporting the arrests of PFLP members – some employed by Palestinian NGOs relevant to this report – in relation to the 2019 terror attack near Dolev in which seventeen-year-old Rina Shnerb was murdered, the corporation would today be in a much better position to provide its audiences with an accurate portrayal of the PFLP and its links to certain “civil society groups”.

As demonstrated by its promotion of a link to a dubious article about a “dossier” published by the radical far-Left +972 magazine, this report – like the ones that preceded it – was not intended to provide BBC audiences with the full range of publicly available information on this story but rather to continue to promote a facile politically motivated narrative that hinders understanding.

In the month since this story broke, the BBC has already demonstrated the vacuousness of its much- touted promotional slogan “news you can trust is news you can use” but the dedication of an article to promotion of the uninformed opinions of assorted ‘celebs’ on the serious issue of terror financing is surely a new low.