On the evening of Friday, October 29th the BBC News website published a report by the Jerusalem bureau’s Yolande Knell headlined “Palestinian groups branded terrorists by Israel say they are being silenced” on its ‘Middle East’ page. 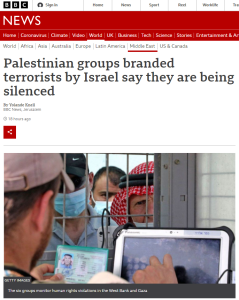 The talking points of two of the Palestinian NGOs concerned – Al Haq and Addameer – are promoted in 165 of the article’s 669 words. Knell uses 145 words to portray negative views of Israel’s decision from the US, the EU, the UN and others, adding 12 words of condemnation from the Palestinian Authority. Criticism from two Israeli politicians on one particular side of the political map is portrayed in 91 words.

In other words, over 61% of the article’s word count is dedicated to promotion of criticism and condemnation of the Israeli defence minister’s decision, while in contrast, a third-hand statement from an anonymous Israeli security “official” is portrayed in just 48 words.

A particularly notable aspect of Knell’s report is its portrayal of the PFLP.

“The leaders of six Palestinian civil society organisations branded terrorist groups by Israel say the move will harm human rights unless it is reversed.

Last week Israel declared that the groups were a front for a militant faction which has committed deadly attacks against it since the 1960s.” [emphasis added]

“The PFLP, a small, left-wing group that does not recognise the State of Israel, carried out a number of armed attacks and aircraft hijackings in the 1960s and ’70s. It was also behind several suicide attacks during the second Palestinian intifada (uprising) in the early 2000s.”

Knell’s portrayal obviously suggests to BBC audiences that the PFLP has not carried out any terror attacks in the twenty years or so since “the early 2000s”. That of course is not the case.

While the BBC belatedly apologised for its lack of coverage of the March 2011 terror attack in which five members of the Fogel family were brutally murdered, it did later report that the two terrorists “belong to the Popular Front for the Liberation of Palestine (PFLP), a radical group which has carried out attacks on Israelis in the past”.

In October 2012 the BBC failed to report on a roadside bomb near Kissufim which was claimed by the PFLP.

In 2013 the BBC ignored the arrests of members of a PFLP cell which carried out a shooting attack in Wadi Qelt.

BBC reporting on the Har Nof attack in 2014 included the following, together with an insert profiling the PFLP:

“The Abu Ali Mustafa Brigades, the military wing of the Popular Front for the Liberation of Palestine, said it had carried out the attack.”

In 2015 the BBC’s English language services failed to report an attack claimed by the PFLP near Shvut Rachel in which Malachi Rosenfeld was murdered and three others wounded.

In June 2017 the BBC failed to inform audiences that two PFLP members were part of a cell that carried out a fatal attack in Jerusalem.

In August 2019 the BBC reported the attack near Dolev in which seventeen-year-old Rina Shnerb was murdered and her father and brother badly wounded.

However when PFLP members – some linked to Palestinian NGOs – were arrested in relation to that terror attack, the BBC chose to ignore the story.

Despite having failed to report the developments in that latter case and others, the BBC Jerusalem bureau is no doubt aware of them and so Yolande Knell should be in a position to give audiences a much more precise picture of PFLP terrorist activity over the past two decades.

That case and others should also have enabled Knell to avoid the embarrassment of uncritically amplifying the talking points of political NGOs that self-describe as ‘human rights groups’, despite their documented links to the PFLP terror group having long been in the public domain.