Previously we discussed the first half of the November 27th edition of a BBC World Service radio programme called ‘The Explanation’ in which Anu Anand and Jeremy Bowen purported to explain the Palestinian-Israeli conflict in fifteen minutes:

Having provided a highly partial description of the history leading up to and including the War of Independence, the programme (which will remain available online for “over a year”) continues with a trite portrayal of the Six Day War which makes no attempt to explain the background and build-up to that conflict. [emphasis in italics in the original, emphasis in bold added] 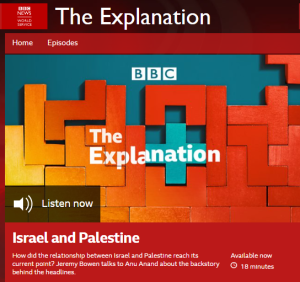 Anand: “That was only the start. The Six Day War in 1967 saw Israel take even more territory, while in the coming decades, Jewish settlers began moving into Palestinian neighbourhoods, bringing with them armed Israeli soldiers, checkpoints and further conflict.”

Bowen: “What the settlements have done – and they started almost immediately after that 1967 victory – is to establish Jews in strategic parts of the occupied territories. The idea was, right from the outset, the settler movement would say that ‘it is our duty to people the land with Jews. This is Jewish land; historically, biblically, it’s Jewish land and we need to take it back and that would be the beginning of righting a great historical wrong’.”

Anand next distorts the name and aim of the PLO (Palestine Liberation Organisation), failing to explain that it was established three years before the Six Day War and so any attempt “to resist Israel” had nothing to do with territory that came under Israeli control as a result of that war.

Anand: “These highly emotive deadly clashes involving religion, land and history have endured and evolved over decades. The Palestinian Liberation Organisation formed in the 1960s to resist Israel. In 1987 Hamas – an extremist Sunni Islamist group – vowed to fight for Israel’s very destruction. That same year Palestinians launched the first Intifada or ‘shaking off’: an uprising against Israeli occupation that led to six years of protests, violent riots and street battles.”

After another undated and context-free archive recording, Anand erases the 1979 peace treaty between Israel and Egypt from the story.

Another archive recording of unidentified people speaking Arabic and English is heard.

Anand: “Israelis and Palestinians signed the Oslo peace accords. The PLO’s Yasser Arafat and the Israeli Prime Minister Yitzhak Rabin shook hands for the first time ever at the White House while President Bill Clinton looked on.”

Bowen: “It represented a real moment of hope.”

An unexplained archive recording is heard before Bowen too erases the Israel-Egypt peace agreement from the picture and once again ignores the topic of Jewish refugees from Arab and Muslim lands.

Bowen: “Because if you look at the, you know, the sorry history of the conflict between Palestinians and Israelis, between Arabs and Jews, there weren’t many moments of hope. There was a feeling that something was going to come out of it. The principle behind the Oslo agreements was that they would…eh…deal with the small stuff first and create a positive mood which meant they could deal with the really big stuff later on which, you know, included where exactly would the borders go, the future of Jerusalem – whose capital city would it be? – and what about Palestinian refugees: what rights would they have?”

Anand: “But they never got to the really big stuff.”

Listeners then hear an archive recording of Bowen reporting from the funeral of Yitzhak Rabin followed by recycling of a narrative that he has repeatedly promoted in the past.

Bowen: “The assassination of Rabin on November 4th 1995, I think it was one of the most effective political assassinations of the 20th century.”

Anand: “Yitzhak Rabin had been shot dead at a peace rally by an ultranationalist Israeli radically opposed to the Oslo accords.”

Following an archive recording of Bowen, he erases the 1997 Hebron Protocol, the 1998 Wye River Memorandum and the Camp David summit in 2000 in order to promote a narrative whereby Rabin’s assassination was the cause of the supposed end of negotiations between Israel and the Palestinians.

Bowen: “After that, the difficult steps couldn’t be taken. Hamas and the others reacted violently. They set out to try to destroy it by killing Israelis; bus bombs, killing civilians, children, women, men in the hope that that would destroy any chance of peace.”

The campaign of terror by Hamas and other factions in fact began long before Rabin was assassinated.

Listeners then hear an archive recording of Bowen which includes the claim that: “Palestinians believe Israel has provoked trouble so it can escape commitments it made in the peace talks.”

Bowen: “It wasn’t certain that Oslo was going to work but I think that had Rabin not been assassinated and had he been able to continue working with Arafat, then they had a chance.”

Bowen provides no evidence to support that claim, which is the opposite of what was apparently his view four years ago.

Ignoring Israel’s disengagement from the Gaza Strip in the summer of 2005, misrepresenting Hamas’ violent coup in the Gaza Strip as having happened during or before 2005 and failing to clarify that the second Intifada was pre-planned and initiated by Arafat, Anand goes on to once again misrepresent the proposed but defunct 1947 Partition Plan.

Anand: “For the next 10 years, from 1995 to 2005, more violence prevailed. A never-ending battle for territory, including the second Intifada which lasted for five years. This time, Hamas took power in Gaza, splitting the Palestinian population politically. The chance of a peace deal with equal territory for both sides and a shared capital in Jerusalem as envisioned by the UN in 1947 became a distant dream. Today, the really big stuff – as Jeremy calls it – remains unsolved. Jeremy why is Jerusalem so emotionally relevant even today to both Israelis and Palestinians?”

Bowen: “Well it starts with religion because Jerusalem is a place which has the holiest sites for Christians and for Jews and the third holiest place in the world for Muslims. So it’s immensely religiously significant. And it’s also a national symbol for both Israelis and Palestinians and it’s always been through its history violently contested.”

Listeners hear an undated and unexplained archive recording about “desecrating the mosque”.

Bowen: “I think the uniqueness of the city is the fact that the three big world religions, they dream about the same small area. And the power of the city as a symbol comes from this high voltage fervour which is created by the fury of nationalists and also by religious passion. Jerusalem and its holy places are like a time bomb really in the middle of the Middle East.”

Anand: “So Jeremy today, after all these failed attempts at peace negotiations, is there still an appetite for peace?”

Bowen: “You know there’s always an appetite for peace if you ask. People will always say ‘yeah, of course I want peace, for goodness’ sake, are you mad?’ The difficulty is what kind of peace and how you get to the peace and whether or not it’s possible to trust the other side with whom you’re gonna to have to make agreements. You know, you make peace with your enemies: you don’t make peace with your friends.”

Clearly that portrayal fails to inform listeners on the relevant topic of decades of Palestinian rejectionism.

Listeners then hear an archive recording of unexplained vox pop interviews without any explanation given as to who is speaking and in what context.

Bowen: “So for the future, well of course you’ll find many, many people who say I want nothing more than peace. To try to get there means sorting out some of these incredibly difficult issues which, you know, if it’s going to be two states, would be what about Jerusalem? What about Palestinian refugees? Where are you going to put the border? Could the Palestinians have an army? Could they defend themselves? Could the Israelis pursue people into their territory? Would they be properly sovereign? Loads of questions like that, which frankly defeated 20 years of Middle East negotiations or so. There are real, real divisions on both sides despite the fact they live in the same land, under the same sun. They’re two really different and separated communities who’ve become more separate.”

Notably, the “difficult issues” presented by Bowen relate mainly to those concerning the Palestinian side while issues affecting Israelis are ignored.

Anand: “Two communities, one land, no peace. That’s Jeremy Bowen the BBC’s long serving Middle East correspondent on why peace remains so elusive. You’ve been listening to ‘The Explanation’ with me Anu Anand on the BBC World Service. Stay up to date with the latest developments on the Israeli-Palestinian conflict by visiting the BBC News website.”

If the makers of this programme really intended to provide the BBC’s worldwide listeners with an explanation of the Arab-Israeli conflict and the Palestinian-Israeli sub-conflict, its numerous factual errors, highly significant omissions and generous use of context-free archive recordings clearly compromised that aim.

The fact that historic Jewish connections to the land were erased and the conflict was portrayed as being one between ‘indigenous’ Palestinians and Jewish immigrants who “began moving to Palestine” in “the 1930s and 40s” materially misleads BBC audiences. The fact that no real discussion of decades of Arab and Palestinian rejections of Jewish historical claims to the land and proposed solutions to the conflict was heard throughout the entire programme is clear indication of its lack of gravity.

If, however, this programme was merely intended to promote and reinforce well-worn, politically motivated narratives on topics crucial to understanding of its subject matter such as the 1947 Partition Plan, the Balfour Declaration, the Six Day War, Rabin’s assassination and the Oslo Accords, it undoubtedly succeeded. Listeners to this programme heard nothing that they have not heard dozens of times in the past from the BBC’s Middle East editor and his colleagues.

AN OVERVIEW OF BBC COVERAGE OF THE BALFOUR DECLARATION CENTENARY