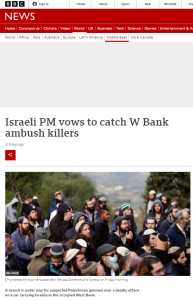 Readers are not informed that the terror attack that is the topic of the report had taken place over 19 hours beforehand, on the evening of December 16th.

“A search is under way for suspected Palestinian gunmen over a deadly attack on a car carrying Israelis in the occupied West Bank.

A 25-year-old passenger, Yehuda Dimentman, was killed and two other occupants were wounded in the shooting near a Jewish settlement in the north.”

The BBC’s description of the location of the attack reads as follows:

“The Israeli military said the men were ambushed as their vehicle left a religious seminary at Homesh, a so-called outpost settlement, one of a type built without government authorisation.

Israeli settlements on territory occupied since the 1967 Middle East war are considered illegal under international law, though Israel disputes this. Palestinians claim the land for a hoped-for independent state.”

Readers are not told that the community of Homesh was evacuated by the Israeli government in August 2005 within the framework of the disengagement plan from the Gaza Strip and four communities in northern Samaria. Since 2009 an unauthorised seminary has operated on the site of the former community, which has periodically been dismantled by Israeli security forces.

The BBC’s article does however promote a context-free reference to “territory occupied” along with the corporation’s long-employed partial mantra concerning ‘international law’, despite the fact that the topic of the legal status of Israeli communities in Judea & Samaria has no direct bearing on this story about the murder of a civilian travelling in a car.

Moreover, readers later find uncritical amplification of a statement issued by Hamas glorifying and ‘legitimising’ the murder of civilians:

“The Palestinian militant group Hamas, which governs the Gaza Strip, praised the shooting, calling it part of a “legitimate struggle”.”

Praise for the attack from additional Palestinian terrorist organisations (including the one apparently behind it) was not included in the BBC’s report.

The practice of focusing audience attentions on the ‘legality’ of towns and villages where attacks that the BBC fails to characterise as terrorism in its own words have taken place is by no means new. That editorial choice of course distracts from the fact that Palestinian terror attacks against Israeli civilians also take place in places that are not located in what the BBC chooses to classify as ‘occupied territory’ and are not – as claimed by the BBC – “illegal under international law”.

Moreover, even as it regularly highlights those talking points, the BBC has never (to the best of our knowledge) clarified to its audiences that even if its portrayal of communities in Judea & Samaria as “illegal” were undisputed, civilians living in such communities are not legitimate targets.

Towards the end of the report, readers find brief references to two recent stabbing attacks which the corporation had not previously reported:

“The shooting follows a spate of attacks on Israeli Jews in recent weeks.

Last week in Jerusalem, a 14-year-old Palestinian girl was arrested on suspicion of stabbing her Jewish neighbour. Days earlier, a Palestinian stabbed a Jewish man in the street before being shot dead by Border Police.”

The first attack mentioned took place in Sheikh Jarrah on December 8th and the second on December 4th near Damascus Gate.

The report’s final sentence once again misleads BBC audiences with regard to the number of people wounded (four, rather than three) in the November 21st shooting attack in the Old City of Jerusalem.

Despite reporting or referencing four terror attacks that have taken place in less than a month, the sole use of the word ‘terrorism’ in this article is found (unsurprisingly to those familiar with BBC editorial policies) in a direct quote from the Israeli prime minister.

Below this latest article, the BBC informs readers that they “may be interested in” a filmed report from October by Yolande Knell which was previously discussed here.