In part one of this post we discussed the first part of the July 5th edition of the BBC Radio 4 programme ‘Analysis’ which was titled ‘Stalemate: Israel and the Palestinians after Gaza’ and which, according to its webpage, will remain available online for over a year. 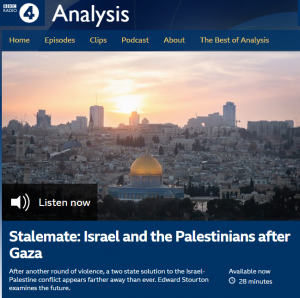 Presenter Edward Stourton describes the programme’s aim as follows: [emphasis in italics in the original, emphasis in bold added]

Stourton: “In this programme we’re going to explore how Israel and the Palestinians reached a place where there’s more talk about a new apartheid than a peace process. Politicians and activists on both sides in this long conflict now seem perilously divided and we’re going to explore what that might mean for the long-term future of the region. Could it even – and we’re not the only people asking this question – threaten the very foundations of the State of Israel? And when will the current troubled status quo, already punctuated by violence, turn critical?”

From 10:19 the discussion turns to the topic of the Palestinian Authority with Ahmad Samih Khalidi describing Mahmoud Abbas as “discredited” and having “lost authority precisely because he’s associated with those failed negotiations with Israel”. The topic of corruption and the repression of the people living under PA rule is not discussed at that point.

Khalidi: “…what used to be a relatively marginal force like Hamas has gained traction and despite the terrible cost, there is the idea that Hamas holds the banner of resistance, which is also…it’s not just about resistance; it’s about dignity, it’s about asserting your right to defend yourself because Hamas from a Palestinian perspective is seen to be defending, not attacking.”

Citing Abbas’ cancellation of the scheduled May election, Stourton again brings in Salem Barahmeh (from 11:50) to talk about the PA’s “extremely authoritarian” rule and the cancelled elections.

Barahmeh: “Elections are not just for Palestinians in the West Bank or Gaza or East Jerusalem. There are millions of Palestinians around the world that also deserve a say in our national movement and they’ve been marginalised and disenfranchised. The power has been centralised in the hands of the few and there are different monopolies of power, whether it’s in the West Bank or Gaza, that cannot continue.”

Stourton then turns to the topic of the rioting in mixed towns in Israel in May.

Stourton: “The way Palestinians are governed varies according to where they live. Many of those on the West Bank are under the day-to-day rule of the Palestinian Authority while Hamas runs things in the Gaza Strip. Most of those who live in East Jerusalem have limited residency rights while those of Palestinian descent who live in Israel do have full citizenship.”

Stourton does not clarify that residents of East Jerusalem have the option of applying for full Israeli citizenship. Neither does he bother to clarify Barahmeh’s links to a political movement called ‘Jeel al Tajdeed’ (Generation of Renovation) before giving him airtime to promote its agenda.

Stourton’s next topic is the 2018 Nation State Law and on that he brings in Sawsan Zaher of Adalah without any explanation of that organisation and its agenda.

Zaher: “The Jewish Nation State basic law sets the constitutional identity of the State of Israel as the state for the Jewish people, basically stating that the right to self-determination applies exclusively only for the Jews. The official language is the Hebrew language. The national holidays are only those that are related to Jews and that as a constitutional principle, it’s legitimate to create and establish towns for Jews only and provide them as a national priority principle with budgets. Now when you have such a constitution which excludes a group of citizens based on their nationality without any mentioning of Palestinians, without any attempt to integrate them with the definition of who we the people of the State of Israel are, who is the nation for?”

Zaher’s portrayal of “national holidays” fails to clarify that the law names only Independence Day and two memorial days while clearly stating that “non-Jews have the right to observe the days of rest on their days of Sabbath and holidays”. She fails to mention that Arabic is defined as having “a special status” and her claims concerning “town for Jews only” are inaccurate as a proposed clause stating that the state could “authorize a community composed of people having the same faith and nationality to maintain the exclusive character of that community” – including non-Jews – was dropped from the text. None of her inaccurate portrayals are challenged by Stourton.

Stourton then (16:47) returns to the topic of Netanyahu – whom he had previously described as having caused the topic of the peace process to be “knocked down the agenda in Washington and other Western capitals”.

Stourton: “There has of course been a huge change on the Israeli side of the equation. Benjamin Netanyahu – the man who did so much to frame the terms of the current relationship with the Palestinians – is out of office. […] If this really is an end to the Netanyahu era, will it mean a new push for some kind of peace process?”

After Anshel Pfeffer dismisses that possibility, the discussion turns to the Abraham Accords, which listeners are told “did not really address the Palestinian issue” and “didn’t do anything to help advance” the “prospect for peace between Israel and the Palestinians”. The fact that the accords had no such aim is not clarified to listeners.

Stourton next raises the topic of the Ra’am party’s participation in Israel’s new coalition government and Anshel Pfeffer promotes the inaccurate claim that the 1949 armistice lines constitute “borders”.

Pfeffer: “…both sides will be more invested in trying to tamp down violence and perhaps create at least within the confines of the pre-67 – the Israeli borders – a slightly better situation…”

Stourton then (19:40) brings in Sawsan Zaher of Adalah – once again without explaining the agenda of that political NGO and without demanding any evidence for her claim that:

Zaher: “Even if you [Israeli Arabs] get integrated, in one second you can be beaten by a police or a settler because you are Palestinian.”

From 20:19 audiences hear a caricature of Israeli politics from Ahmad Samih Khalidi which once again steers listeners towards the view that the absence of a peace process is entirely down to the Israeli side:

Khalidi: “You don’t have any significant political body of course in Israel that either perceives the potential of peace or has any clear idea of what peace means in a way that’s acceptable or at least agreeable to the Palestinians. There are annexationists, there are one-statists on the Israeli side. There are transferists [sic] – people who think that Palestinians can or should be expelled. There are racists, there are far-right extremists. There are religious nationalists, the settlers – uh! But you don’t really see where the dynamic for a new Israeli transformation towards peace is going to come from. And I don’t think this government offers it.”

Obviously that portrayal excludes the vast majority of the Israeli political spectrum. Notably, no effort at all is made to categorise the views of Palestinian politicians, even in such a cartoonish manner.

Stourton next turns (21:08) to discussion of alternatives to the two-state solution which, according to him “most of the players we’ve talked to have given up on”. After a discussion with Dore Gold on possible federations, Stourton brings up the ‘one-state solution’.

Stourton: “On the Palestinian side, the idea that is engaging many young people is what’s known as the one state solution. Accepting that Israel’s occupation has effectively turned the Palestinian territories into part of Israel and fighting for human rights instead of a new state.”

Barahmeh: “We don’t currently live in a two-state solution. We live in a one state reality. Israel controls every human being that lives in the land between the river and the sea, without exception. It’s not something that eventually might happen. If you go to anyone on the ground, you ask them what do you really want, they say I just want my freedom and rights in whatever manner that can be delivered to us, we are OK with it. But yeah, there’s a fundamental shift from this full out endorsement and acceptance of the two-state solution as the only viable option.”

Failing to challenge the outlandish – but not novel – claim that Israel “controls” the people living under PA and Hamas rule (apparently including those who launch rockets at its civilians), Stourton then (23:57) circles back to the ‘apartheid’ messaging:

Stourton: “The one-state shorthand has also, ironically, been used by Israelis on the right who argue that Israel should annex large areas of what is legally still regarded as occupied land. It does however have one very obvious flaw from an Israeli perspective. How could an Israel that includes a large and growing Palestinian population be both a democratic and a Jewish state? That takes us back to where we began, to the idea of apartheid.”

Ben Ami: “Another solution is what is happening by osmosis – that is a one-state reality – which in my view would create a South African situation without a South African solution because I do not perceive the possibility of a Jewish minority ever handing power to a Palestinian majority.”

Gold: “Well as long as the Zionist movement believes that the Jewish people should have a nation state of their own, I don’t think the single state is going to go anywhere.”

Listeners are not informed that some Palestinian campaigners – including Barahmeh – promote (in whatever increasingly ‘progressive’ guise) the one-state solution precisely as a means of bringing an end to the Jewish nation state. They are however told that “for many Israelis” the lack of any progress in negotiations with the Palestinians “doesn’t really matter”.

Stourton’s last question is “what does the future look like?” if a two-state solution is not reached and once again the ‘apartheid’ smear is promoted.

Walles: “…the way that Israel in the past has avoided charges of apartheid and oppression and all of the charges that they face is by the fact that there was a negotiating process. If you don’t have the hope even of a way to resolve it – at least an agreed objective for the future – it’s much harder for Israel to avoid those charges.”

The formula behind this programme is very obvious. It lays the blame for the failure of negotiations squarely at Israel’s door without any effort made to inform listeners of the responsibility of Palestinian leaders for the lack of progress and the related internal politics within the Palestinian camp. It then promotes the notion that in the absence of a two-state solution, the outcome is ‘apartheid’ – without any serious effort being made to examine the political motivations behind the use of that trigger terminology. It goes on to suggest that the only way of avoiding apartheid is the ‘one-state solution’ without explaining why that concept is promoted by some Palestinian activists, including those inadequately presented in this programme.

Once again the BBC has prioritised promotion of a politically motivated narrative over its obligation to provide accurate and impartial content that builds audience understanding of this particular ‘global issue’.