BBC campaigning on the topic of neighbourhoods in what it terms “East Jerusalem” continued on August 16th with the appearance on the BBC News website’s ‘Middle East’ page of a filmed report by Anastassia Zlatopolskai titled “Why is Israel demolishing homes in East Jerusalem?”.

“The demolition of houses built without planning permission in East Jerusalem is seen by some Palestinians as an attempt to drive them out – but Israel says it is trying to keep the city in order.”

Most of that 3:10 minute film features one woman who is presented to audiences as “Amani Mousa Odeh, resident of Silwan, East Jerusalem”. Viewers are not informed that Odeh is active in an organisation called ‘Save Silwan Campaign’ and another called the ‘Neighborhood Defense Committee’ and that she frequently promotes the messaging of those political campaign groups in English language media.

The film opens with a backdrop of images of a demolished structure. 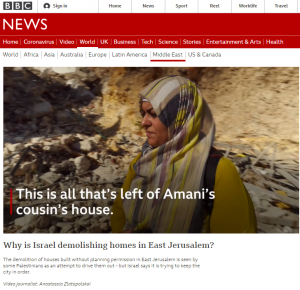 BBC: “This is all that’s left of Amani’s cousin’s house. It was recently demolished by the Israeli government for being built without a permit. And Amani fears her own house could be next.”

Odeh: “Everyone thinks that one day he will be in the shoes of the owner of the house. This land was inherited from his grandfather and [great] grandfather. And when he go to the municipality in order to have permission for the building, they refused to give him [it].”

BBC: “Her cousin’s house was demolished on 10 August this year. East Jerusalem has been under Israeli occupation since 1967. Demolitions and forced evictions are illegal under international law.”

As ever, the BBC makes no effort to inform audiences of the fact that “East Jerusalem” was illegally occupied by Jordan between 1948-1967 or of its inclusion in the territory assigned by the League of Nations to the creation of a Jewish homeland. Following on from BBC’s partial portrayal of that area as being “under Israeli occupation” – rather than disputed – is an equally one-sided portrayal of “international law”, with no attempt whatsoever made to inform viewers of alternative legal opinions on the issue.

BBC: “Building permits are very difficult to get in East Jerusalem and Palestinians say it’s almost impossible for them to get them. Amani built a house despite multiple failed applications and like many in the Silwan neighbourhood now faces losing it.”

No effort is made to remind viewers that in many countries around the world a person who built a house without planning permission would similarly be served with what is known in the UK as an enforcement notice and would ‘face losing it’.

Odeh: “For my house – me, my husband and my two children. Our house is under demolition in any moment. I was born in Silwan. I was raised in Silwan. I married in Silwan. I even called my daughter Silwan.”

Those talking points are of course entirely irrelevant to the issue of illegal construction but the BBC nevertheless chose to promote them.

BBC: “Israel says the problem is land registration, although many Palestinians claim ownership, often dating back more than 100 years.”

The Israeli point of view is presented by Fleur Hassan-Nahoum, deputy mayor of Jerusalem, in just 24 seconds of this 3 minute and 10 second report.

Hassan-Nahoum: “There are parts of East Jerusalem where there is very little legal land registration. It’s a mish mash of Jordanian and Ottoman and more importantly, no land registration at all. There are people who have built illegally on parks, on national heritage sites, and what we’re trying to do – and we’re doing this mainly through consensus – [is] to regulate that so that green spaces remain green spaces for these very communities.”

BBC: “About 70 homes in Amani’s part of Silwan alone, al Bustan, are under threat of demolition*.”

The asterisk at the end of that sentence is intended to direct viewers’ attentions to the top right of the screen and to clarify that the claims regarding “70 homes” are sourced from an NGO. 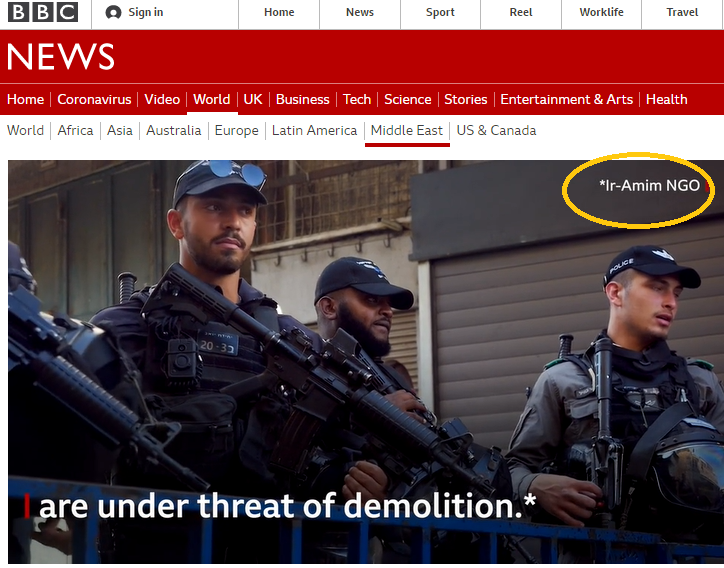 Predictably, no effort is made to inform audiences of the political agenda of ‘Ir Amim’. Neither are viewers told anything about the history of the al Bustan area of Silwan or the specifics of the long-running efforts made by the Jerusalem municipality to resolve the problem of illegal construction on a recognised antiquities site and their rejection by residents. Those significant omissions mean that this filmed report does not in fact meet the supposed aim expressed in its title of informing viewers why demolitions are now taking place in Silwan.

BBC: “Some Palestinians have pulled down their own houses to avoid being charged for their demolition. Amani couldn’t bring herself to do that.”

Odeh: “It’s not related to stone. It’s more related to who I am. There is no other choice for us. It’s our identity to define our own lands. Even if we have to build a tent instead of each house, we will build a tent and stay in the tent. I believe that it’s my right to stand for my children’s right to live in Silwan.”

In May the BBC began to produce serially incomplete and politically partial reporting on the topic of the property dispute in the Jerusalem neighbourhood of Sheikh Jarrah (see ‘related articles’ below) which – like Hamas – it continues to present as one of the factors behind the conflict instigated by Hamas that month.

While the Silwan neighbourhood has been featured in BBC reporting on numerous occasions in the past, since late June audiences have seen augmented coverage of that topic with this latest superficial filmed report by Zlatopolskai coming just six days after multiple reports by another BBC staffer.

Clearly the BBC is very much invested in the one-sided political campaign run by local residents and assorted NGOs to which it has chosen to lend its worldwide outreach.

2 replies on “Another chapter in BBC campaigning on Silwan”