On August 9th the BBC News website published a report headlined ‘West Bank: Al-Aqsa Martyrs’ Brigades commander Ibrahim al-Nabulsi killed in Nablus’. Originally uncredited, later versions of that report were attributed to Anna Foster who until recently was based in Beirut. 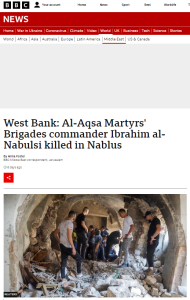 The BBC’s portrayal of the operation earlier in the day in which Ibrahim al-Nabulsi and two others were killed tells readers that:

“The local head of the Palestinian militant group, the al-Aqsa Martyrs’ Brigades, has been killed in an Israeli operation in the occupied West Bank. […]

The al-Aqsa Martyrs’ Brigades is a network of militias linked to Fatah, the Palestinian movement which controls the West Bank.”

Interestingly, the BBC’s own profile of Fatah – which has not been updated for well over a decade – still tells readers that:

“The second intifada saw a number of armed groups associated with Fatah emerge, most notably the al-Aqsa Martyrs’ Brigades. The Brigades are neither officially recognised nor openly backed by Fatah, though members often belong to the political faction.”

However according to some local media reports, as well the IDF statement on the incident, al-Nabulsi was not affiliated with any known terrorist organisation.

The report goes on: [emphasis added]

“Israel has accused Nabulsi of leading a cell which carried out a spate of attacks against Israelis in the West Bank. […]

According to Israeli media, al-Aqsa Martyrs’ Brigades have co-operated with Palestinian Islamic Jihad (PIJ) in launching a number of attacks targeting Israelis in the West Bank.”

“He [al-Nabulsi] was one of the terrorists involved in a shooting at Joseph’s Tomb at the end of June, in which two Israeli civilians and one IDF commander were injured. The attack occurred during a regularly scheduled visit to the tomb to mark the new month, in which thousands of Israeli worshipers are allowed access to the site after the IDF has secured passage to the tomb.”

The Times of Israel noted that:

“Nabulsi was part of a squad that had committed several shooting attacks against soldiers and civilians in the West Bank earlier this year, according to the Shin Bet. The IDF said that included a shooting attack at the Joseph’s Tomb complex in the outskirts of Nablus.”

“It was the arrest last week of Bassem Saadi, said to be the top PIJ figure in the West Bank, which led to the pre-emptive Israeli air strikes on PIJ militants in the Gaza Strip over the weekend that resulted in the deaths of at least 44 Palestinians – including two top militant commanders.”

In fact, it was planned Palestinian Islamic Jihad attacks which led to those pre-emptive strikes on PIJ cells and commanders.

As we see, with the exception of “two top militant commanders”, the BBC once again failed to distinguish between terrorist operatives and uninvolved civilians even though the PIJ itself had already stated by the time this report was published that twelve of its operatives were killed during Operation Breaking Dawn. In addition, the BBC continues to erase the relevant issue of Palestinians killed by shortfall PIJ missiles from the picture entirely.

Moreover, later versions of the report also included the following:

“The violence in the occupied Palestinian Territories keeps on increasing – 129 Palestinians have now been killed by Israeli fire since the beginning of this year.

Israel calls it “counterterrorism activity”, and says it is essential to protect its people from attacks. But there is criticism over the number of Palestinians who are killed and injured during these operations.”

The BBC does not reveal the source of the cited number 129 or exactly who has voiced the “criticism” it chooses to amplify.

The ITIC has reported that between January 1st and July 14th 2022, forty-nine Palestinians were killed during Israeli counter-terrorism operations, 67% of whom belonged to one of the Palestinian terrorist organisations.

“Nineteen were Fatah operatives, although not all belonged to its military-terrorist wing; 11 were Palestinian Islamic Jihad (PIJ) operatives, two were Hamas operatives and one was a Popular Front for the Liberation of Palestine (PFLP) operative.

Sixteen (33%) Palestinians who were killed had no organizational affiliation. However, at least some of them had previously participated in clashes with the Israeli security forces. One was known as a permanent “demonstrator,” two had been imprisoned in Israel and released, and one was a wanted terrorist operative.”

In other words, the BBC’s scare quotes around the term counterterrorism activity are entirely unwarranted and, together with its failure to distinguish between terror operatives and others both in the Gaza Strip and in Judea & Samaria, they indicate that the corporation’s journalists are more committed to promoting a narrative than to providing audiences with accurate and impartial information which would enhance their understanding of this topic.

In the final three paragraphs Foster managed to ignore the social media pictures showing al-Nabulsi’s mother brandishing a firearm during the funeral procession.

“As pictures of al-Nabulsi’s body wrapped in a Palestinian flag circulated on social media, there were clashes in Ramallah and Hebron, fuelled by the latest Israeli raid.

In Bethlehem, a general strike was called.

Frustrated by the Palestinian Authority’s ailing leadership and desperate for change, huge chanting crowds gathered in the streets to protest against yet another death.”

Foster did not bother to explain to readers what sort of “change” she believes the Palestinians who organised riots, rallies and strikes to mourn a terrorist actually want.