At what age, in the eyes of the media, can Israelis who live with their parents in communities across the green line be characterized as “settlers”?  Evidently, for the Guardian at least, such a pejorative can be imputed to a 16 year-old victim of Palestinian terror.
Here’s the headline of the Guardian’s first report (on Friday, June 13, by Peter Beaumont and Paul Lewis) about the three teenage yeshiva students kidnapped by terrorists on Thursday night in the Gush Etzion area of Judea and Samaria (the West Bank).

Israeli security forces have launched a mass search of the Hebron hills after three teenage settlers, one believed to be a US citizen, were reported missing amid fears they may have been kidnapped by a Palestinian group.

First, the Guardian got it wrong, as two of the three teens do no in fact live in Israeli ‘settlements‘.
Per Times of Israel:

The three — Shaar (16) from the settlement of Talmon, Frenkel (16) a dual Israeli-American citizen from Nof Ayalon near Modi’in, and Yifrach (19) from Elad near Petah Tikva — were reportedly last spotted at a hitchhiking post in the vicinity of Hebron on Thursday night. No one has seen or heard from them since

Here’s a map of the three communities.  As you can clearly see, only Talmon, where Naftali Frenkel lives, is situated across the green line: 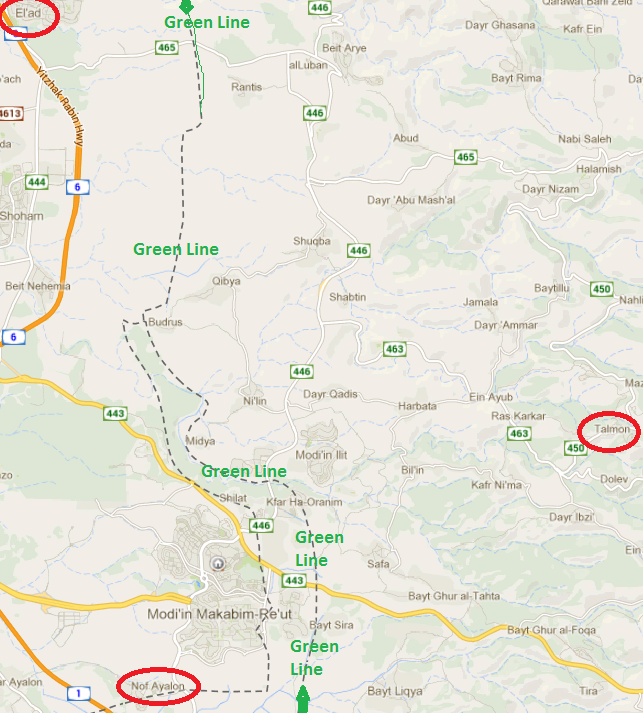 In addition to the factual error, however, what possible moral significance does Beaumont and Lewis assign to the fact that the parents of one of the innocent Jewish teens decided at some point to move to an Israeli community across the green line?


Additionally, we’d like to know where precisely the Guardian is prepared to draw the line in their use of such a loaded term.  Would they refer to even young children (including infants) killed by Palestinian terrorists – such as the family members murdered by terrorists during the 2011 massacre in Itamar, including 11-year-old Yoav, 4-year-old Elad, and three-month-old Hadas – as “settlers”?
Let’s be clear: The Guardian’s use of the term “settler” – as an adjective to modify an otherwise factual description of an Israeli who’s been kidnapped, injured or killed by a Palestinian terrorist – represents a political decision which dehumanizes the victim, and serves as a potent reminder of the media group’s egregious bias even when publishing putatively straight news stories about the Israeli-Palestinian Conflict.