Earlier this month we discussed BBC coverage of the news that the Beitar Jerusalem football club has a new co-owner from the United Arab Emirates:

It is therefore worth noting a later report on the same topic which was aired on December 18th on BBC World Service radio’s ‘World Football’ programme under the title ‘A new era for Beitar Jerusalem?’. 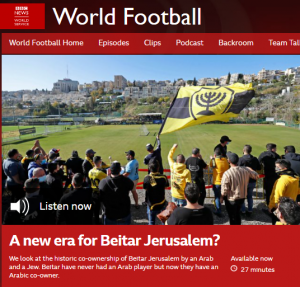 In that long item (from 03:40 here), presenter Mani Djazmi interviewed Beitar’s Israeli owner Moshe Hogeg and sports analyst Josh Halickman, giving listeners a much more comprehensive and objective view of the story than had been previously provided to BBC audiences.

This is not the first time that we have seen that BBC sports journalists have provided a more accurate and impartial view of Israel related sports stories than some of their colleagues.