From the moment on May 11th when the news broke that Al Jazeera journalist Shireen Abu Akleh had been shot while in Jenin to report on an Israeli army operation, the BBC adopted – and heavily promoted – the version of events put out by her employer, her family, the Palestinian Authority and assorted political NGOs.

All along the way it has been perfectly obvious that any investigation into that incident by the IDF would be rejected by such parties unless it conformed to the narrative they had promoted from the very beginning, as was demonstrated in July when the US State Department issued a statement regarding the inconclusive results of analysis of a bullet said by the Palestinian Authority to have killed Abu Akleh.

On September 5th the IDF released the conclusions of its investigation into the incident and the Military Attorney General put out a related statement explaining why a criminal investigation is not warranted in this case.

“Following the completion of a series of investigations carried out by a dedicated task force, it appears that it is not possible to unequivocally determine the source of the gunfire which hit Ms. Abu Akleh. However, there is a high possibility that Ms. Abu Akleh was accidentally hit by IDF gunfire that was fired toward suspects identified as armed Palestinian gunmen, during an exchange of fire in which life-risking, widespread and indiscriminate shots were fired toward IDF soldiers. Additionally, it is important to emphasize and clarify that throughout the entire incident, IDF gunfire was fired with the intent of neutralizing the terrorists who shot at IDF soldiers, also from the area in which Ms. Shireen Abu Akleh was present. Another possibility which remains relevant is that Ms. Abu Akleh was hit by bullets fired by armed Palestinian gunmen.”

BBC coverage of that topic included a written report by Tom Bateman which was published on the BBC News website’s ‘Middle East’ page on the afternoon of September 5th. 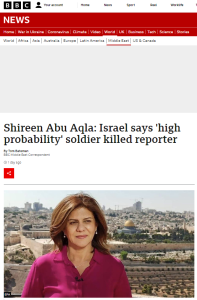 The first five paragraphs of the report provide signposting for the rest of its content:

“The Israeli military has concluded there is a “high probability” that one of its soldiers killed the Palestinian-American journalist Shireen Abu Aqla.

The veteran Al Jazeera correspondent was shot in the head while covering a raid in the occupied West Bank in May.

It is the closest the military has come to admitting responsibility.

The military’s top legal officer has also ruled out a criminal investigation of the soldiers involved, effectively ending the probe into the case.

Abu Aqla’s family said they were “not surprised” that the IDF was trying to obscure the truth and avoid responsibility for her killing.”

The first – and only – time that readers come across any reference to the finding that if Abu Akleh was shot by an IDF soldier, it was unintentional, comes in paragraph ten, in the form of a quote:

“A senior IDF official said on Monday that there was a high probability that she was shot “by mistake by an IDF soldier, and of course he didn’t identify her as a journalist”.”

Following Bateman’s account of the IDF’s statement, readers are told that:

“However, video evidence from the moment Abu Aqla was shot does not back the claim of militant gunfire in the spot that journalists and bystanders had gathered.”

The report goes on to state:

“The lack of a criminal investigation will anger Palestinians and will come as a further blow to Abu Aqla’s family.”

However, Bateman does not link to the MAG statement on that matter or explain why a criminal investigation is not warranted in this case.

He does, however, uncritically amplify an inflammatory pseudo-legal smear from the Abu Akleh family and disinformation from unidentified political NGOs: [emphasis added]

“Responding to the IDF announcement they said: “It’s obvious to anyone that Israeli war criminals cannot investigate their own crimes. However, we remain deeply hurt, frustrated, and disappointed.”

Israeli and Palestinian human rights groups have long criticised the IDF’s mechanism for internal investigations, arguing that it grants soldiers near total impunity when it comes to prosecution in cases of harming Palestinians.”

Another baseless smear from the Abu Akleh family appears later on in the report, together with a video by Bateman which was originally published in July.

“Earlier this year, her family called for full accountability, including a criminal investigation. Her brother Tony told the BBC in July that she was “assassinated by extrajudicial killing, and we simply need someone to be held accountable”.”

“In May, dozens of Congressional lawmakers signed a letter to the FBI and the state department demanding a probe by American law enforcement agencies.”

Bateman does not clarify that the list of fifty-odd signatories of that letter (out of a total of 535 members of Congress) includes several known for their anti-Israel stances such as Rashida Tlaib, Ilhan Omar and Alexandria Ocasio-Cortez.

That information was also omitted from a radio report by Bateman on the same topic which was aired on the September 5th edition of the Radio 4 programme ‘PM’ (from 21:31 here).

Bateman: “I mean the reason the American approach matters here is that the Biden administration has been under quite a lot of pressure from Democratic lawmakers in Washington who just simply felt that there was in effect a whitewash over this, that she [Abu Akleh] – like any other American citizen – should be given the full, transparent investigation that would include the FBI. Now the administration resisted that…”

Bateman did not bother to explain to listeners the particular circumstances under which the FBI is authorised to investigate the deaths of US citizens abroad.

A demand for an investigation by another body was also promoted by Bateman who, not for the first time, appears to think he knows better than the IDF investigators what was happening on the ground at the time. [emphasis in italics in the original, emphasis in bold added]

Bateman: “So what we’ve had today is what they’ve called their final conclusion about what they say were several probes – internal investigations – into the way she was killed. And what they have said is they now believe there is a high probability, as you say, that IDF soldiers – or an IDF soldier – fired the fatal shot that killed her during that military raid. Now crucially, they stop short of definitely taking responsibility because they say this was mistaken – that they were trying to fire at Palestinian militants – and they also leave open the possibility that it may…the bullet may have come from Palestinian militants, although there is no evidence that would back up that version of events. So the family in response to this, of Shireen Abu Akleh, have simply said that this is an attempt by the Israelis to obscure truth and avoid responsibility. They’re pressing now for a full investigation at the International Criminal Court into her death.”

Listeners also heard the view of the same Palestinian Authority which refused to cooperate with investigations and took two months to hand over the bullet it claims killed the journalist.

Bateman: “As for the Palestinian Authority, well they have echoed what the family have said and described this as a new Israeli attempt to evade responsibility.”

The fact that the Abu Akleh family and the Palestinian Authority reject the findings of yet another investigation which did not yield the conclusions they wanted comes as no surprise. Sadly, neither does the fact that the BBC (which has previously reported on investigations by the PA and the UNHCHR) continues to uncritically promote baseless smears and unproven allegations from those parties under the guise of supposedly accurate and impartial reporting.