Previously we saw how, in a BBC World Service radio report supposedly about Israel’s vaccination drive, Lyse Doucet thought it appropriate to ask an Israeli interviewee for comment on “international law” even though he is a medical doctor with no expertise in that field.

On January 6th listeners to the same radio station witnessed the same phenomenon in an edition of ‘OS’ (Outside Source) which included an item described as follows in the synopsis: 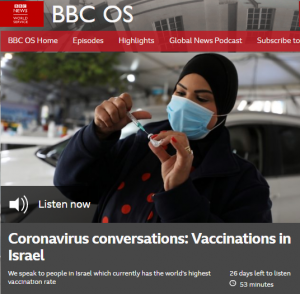 “An increasing number of countries around the world are starting to vaccinate their populations against Covid-19. Today we look at Israel, which has the highest rate of vaccinations globally, with nearly 15% of the population already vaccinated. We’ll speak to people in Israel and the Palestinian territories about the vaccination program.”

The item (from 27:35 here) began with presenter Nuala McGovern introducing her interviewee:

McGovern: “…Professor Manfred Green, he’s a medical doctor, also professor of epidemiology in the school of public health at the university of Haifa in Israel and he’s also on the national committee for immunisation.”

Most of the interview did indeed relate to the topic of Israel’s vaccination roll-out but at 38:30 McGovern changed the subject. [emphasis in italics in the original, emphasis in bold added]

McGovern: “Let me turn to one aspect as well that some people have been writing about and talking about and that is Palestinians in the West Bank or in Gaza that have not been vaccinated. It is under the Palestinian Authority to organise the health affairs, however some human rights groups they say it’s really Israel’s obligation, they would say, as an occupier to roll out vaccines also for Palestinians. Eh…is this a discussion that’s being had where you are?”

Once again a BBC journalist concealed the the political agenda behind that campaign by failing to name the organisations fuzzily portrayed as “human rights groups” or to clarify that they include political NGOs (in some cases foreign funded) with a record of lawfare campaigns against Israel such as B’tselem, Amnesty International Israel, Gisha, Lawyers for Palestinian Human Rights, Adalah, Al Mezan and the PCHR – the latter two of which are known to have links to the PFLP terrorist organisation.

Green: “I’ll give you my own opinions. We are…we are not only neighbours, we are very close neighbours. Regardless of whether you want to use terminology about who is responsible for who, we are neighbours and in my opinion we are responsible for each other in any event. And if they are not safe, we are not safe and vice versa and there is an obligation to help each other. So I think that was a very important point that should be tackled by this government, by our government and also by the Palestinian Authority. I must be honest that the Palestinian Authority, we have collaborated very closely on vaccinations in the past. For the last few years they have pretty much been independent in maintaining their routine vaccination programme. But that doesn’t mean that that’s solved the problem right now. I think that you are quite…the point is very well made that we need to find solutions to make sure that the Palestinians are vaccinated and I would very much like to suggest that the World Health Organisation be very closely involved in this because I think we need them here both technically and also because it’s an environment where it’s good to have international bodies like WHO involved in it. So my answer frankly is that I would avoid kind of the polemic terms and, you know, the terminology of who is bad and who is good and say we all need to get together and look after each other and I recognise that Israel has a responsibility to the Palestinians.”

McGovern’s closing remarks indicated that despite being fully aware of the fact that under the terms of the 1995 Oslo Accords the Palestinian Authority took on responsibility for the healthcare of Palestinians living in the West Bank and Gaza Strip and it is hence the PA health ministry which is responsible for vaccinating Palestinians, she chose nevertheless to amplify a transparently political campaign.

McGovern: “That’s Professor Manfred Green – very interesting – University of Haifa in Israel. And just on that last point that we were talking about as well, just to add; the human rights groups that I mentioned, some say that Israel has those obligations but under the Oslo Accords it is…they say that the health is actually under the Palestinian Authority; they would be in charge of things like distributing vaccines. Let’s see where it goes…”

The next hour of the programme also included material relating to the topic of Israel’s vaccination drive. From 33:53 listeners heard solicited recorded comment from two Israelis describing their experiences. Following that (from 36:42 here) they heard from a resident of the Gaza Strip who had previously appeared on the same programme in November.

“Hi this is Farah Baker 22 years old from Gaza. We here in Gaza absolutely have not delivered the vaccine yet and we have no expectations yet that we are going to deliver it. As Israel has become the first country in the world to administer Covid-19 vaccines to more than 10% of its population and it has made a decision not to vaccine [sic] Palestinians living in the occupied West Bank and Gaza. And for a while we in Gaza got run out of PCR tests because of the blockade. And the health system in Gaza is on the verge of collapse due to the lack of equipment. and with a very high unemployment rate in Gaza which is about 50% and most people who are dependent on daily salaries such as taxi drivers and people work in the market and their lives have stopped so they can’t cover up their daily [unintelligible]. The system now in Gaza is that the lockdown is start at 6:30 p.m. until 7 a.m. and people finish their work at 4 p.m. or 5 p.m. so they have no time to go to the market and buy things. So things are getting much more horrible than ever.”

McGovern made no effort to challenge the falsehood that Israel “has made a decision” not to vaccinate Palestinians or the lie that any shortage of PCR tests is “because of the blockade”. She did however make the following closing remarks:

McGovern: “Thanks so much for all the messages and we will repeat that the Palestinian Authority are in charge of…ehm…the healthcare system and that’s under the Oslo Accords which are separate to Israel’s system that, as you’ve been hearing, different opinions on who should do what.”

The BBC obviously fully understands that since the Oslo Accords were signed a quarter of a century ago, the Palestinian Authority has been responsible for the healthcare of Palestinians. It nevertheless continues to exploit reports ostensibly about the vaccination drive in Israel to amplify the false and politically motivated claim that Israel has an “obligation…as an occupier” to vaccinate people who belong to an entirely separate healthcare system.