Late on February 5th the BBC News website published a 425-word report headlined “ICC rules it has jurisdiction over West Bank and Gaza ‘abuses’” and illustrated with an unrelated photograph. 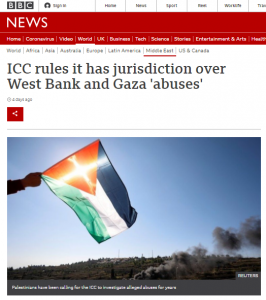 The report does not provide readers with a link to the ruling itself, which is described as follows:

“In their decision Friday, the ICC said it had decided by majority that the court’s jurisdiction “extends to the territories occupied by Israel since 1967, namely Gaza and the West Bank, including East Jerusalem”.

The court said the decision was based on rules in the court’s founding documents and does not imply any attempt to determine statehood or legal borders.”

Readers were not told that the “majority” was 2:1 or that one of the three judges published a partly dissenting opinion in which he wrote the following:

“The dissenting judge, Péter Kovács, rejected the argument that the PA is a state and that it therefore does not constitute the required “state inside whose territory the said actions took place.” Kovács wrote that he “felt neither the Majority’s approach nor its reasoning appropriate in answering the question before the Chamber” adding that in his opinion “they have no legal basis in the Rome Statute, and even less so, in public international law.””

The sole link in the BBC’s report takes readers to one of its own previous articles (discussed here) on the long-running story.

In addition to comment from the Palestinian Authority prime minister and the Israeli prime minister, readers were presented with part of a statement made by the US State Department spokesperson:

“A State Department spokesman said the US had “serious concerns” about the ICC’s effort to assert jurisdiction in the region.”

“Today, the International Criminal Court (ICC) issued a decision claiming jurisdiction in the West Bank, East Jerusalem, and Gaza, while expressly recognizing the serious legal and factual questions that surround its ability to do so.

As we made clear when the Palestinians purported to join the Rome Statute in 2015, we do not believe the Palestinians qualify as a sovereign state, and therefore are not qualified to obtain membership as a state, or participate as a state in international organizations, entities, or conferences, including the ICC.

We have serious concerns about the ICC’s attempts to exercise its jurisdiction over Israeli personnel.  The United States has always taken the position that the court’s jurisdiction should be reserved for countries that consent to it, or that are referred by the UN Security Council.”

The BBC’s report was not subsequently updated to inform readers of similar statements put out by other countries, including Australia, the Czech Republic and Germany, or the praise for the ICC’s ruling that came from the terrorist organisation Hamas.

The BBC did however consider it appropriate to close its report with the longest statement on the topic from any of its quoted commentators – the serially anti-Israel political NGO ‘Human Rights Watch’ (HRW).

“It’s high time that Israeli and Palestinian perpetrators of the gravest abuses – whether war crimes committed during hostilities or the expansion of unlawful settlements – face justice,” she said in a statement.”

The BBC has been reporting developments in this ongoing story for over six years. As has so often been the case in the past, readers of this report found a superficial account which contributes little to enhancement of their understanding of the topic.