Last week we looked at BBC World Service radio news reports from October 24th/25th on the topic of what were described as “homes for Jewish settlers”.

On the evening of October 27th the BBC News website published a report on the same subject on its ‘Middle East’ page. Titled “Israel advances plans for 3,000 new homes in West Bank settlements”, that report follows the format long seen in BBC coverage of house building in locations in which the corporation seems to think Jews should not reside.

The long-standing partial BBC mantra concerning ‘international law’ is promoted in both the main illustration and the body of the report. 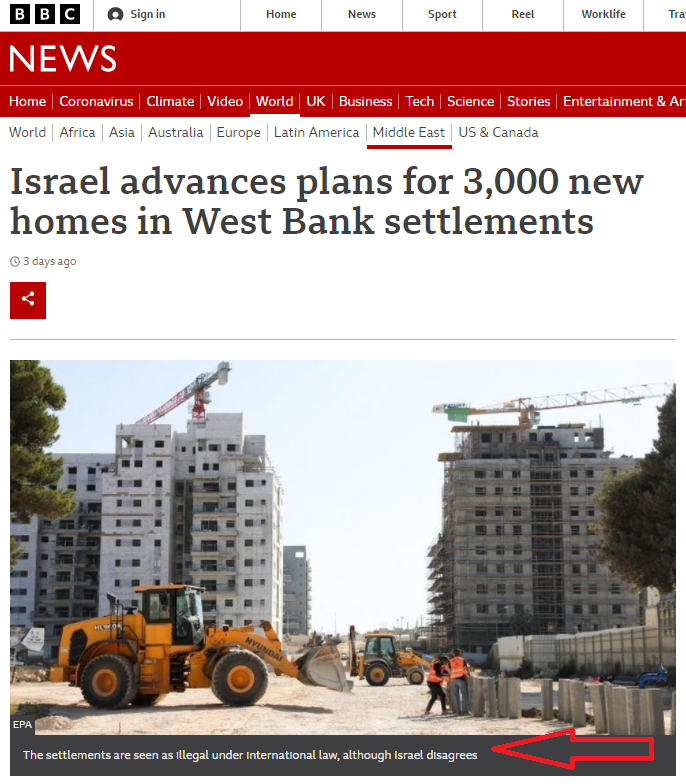 “More than 600,000 Jews live in 145 settlements built since Israel’s occupation of the West Bank and East Jerusalem in the 1967 Middle East war. Most of the international community considers the settlements illegal under international law, though Israel disputes this.”

The report includes a much-used partisan map sourced from the foreign funded political NGO B’tselem which is frequently seen in BBC coverage and which, inter alia, portrays the Jewish Quarter of the Old City of Jerusalem as a ‘settlement’.

Equally predictable in any BBC report about building permits is the inclusion of uncritically presented talking points from the political NGO ‘Peace Now’ – including a promoted link to its content.

“The Israeli anti-settlement watchdog Peace Now reported that the vast majority of the new homes approved on Wednesday would be built in settlements deep inside the West Bank, and that several isolated settlements would undergo a “massive expansion”.”

Despite BBC editorial guidelines on impartiality, readers are not provided with adequate information concerning the “affiliations, funding and particular viewpoints” of the two political NGOs that contributed material to this report.

The article re-promotes a filmed report by Tom Bateman dating from February 2020.

The article twice promotes the unsubstantiated claim that building new houses within the municipal boundaries of existing communities “damages prospects” for future resolution of the conflict.

“The announcement follows a public rebuke of Israeli policy from US President Joe Biden’s administration.

It warned that it “strongly opposed the expansion of settlements” because it damaged prospects for peace between Israel and the Palestinians.”

“On Tuesday, US state department spokesman Ned Price told reporters that it was “deeply concerned” by the Israeli plans.

“We strongly oppose the expansion of settlements, which is completely inconsistent with efforts to lower tensions and to ensure calm, and it damages the prospects for a two-state solution,” he said.”

The BBC of course does not bother to examine the veracity of that claim or to remind readers that Israel has in the past evacuated communities in Sinai, the Gaza Strip and northern Samaria. Neither does it bother to mention any of the other issues that might be seen as no less damaging to “prospects for peace” such as the refusal of Palestinians to recognise Israel as the Jewish state or Palestinian terrorism.

Palestinian Authority talking points are likewise uncritically promoted without any reminder of the fact that the status of “land they claim” is subject to final status negotiations.

“The Palestinians have called on the world to confront Israel over the “aggression” constituted by settlement construction on land they claim for a future independent state.”

“Former US President Donald Trump displayed a much more tolerant attitude towards settlement activity and declared that settlements were not inconsistent with international law.

Israel promoted plans for more than 30,000 settler homes in the West Bank during the four years he was in power, according to Peace Now.”

The BBC does not provide any evidence to support that claim and neither does it explain what “promoted plans” is supposed to mean and whether or not the number cited actually includes different stages of the same planning application. In fact, during the four years 2017 to 2020 inclusive, a total of 7,323 dwellings (“settler homes” in BBC speak) were completed in Judea & Samaria.

With regard to the story that is the hook for this predictable report, the number 3,000 in the headline misleads audiences because – as noted in the report itself – only 1,800 of those units actually received final stage planning permission. No effort is made to inform readers that the permits relate to new dwellings within the municipal boundaries of existing communities.

In contrast to the earlier BBC World Service radio reports, at the end of this article readers do find a mention of building permits set to be approved in Palestinian communities.

“Next week, the Israeli planning committee is scheduled to discuss plans for 1,300 new homes in Palestinian villages in the 60% of the West Bank, classified as “Area C” under the Oslo Accords, that is under full Israeli military and civil control.

It would be the largest number of homes for Palestinians approved by Israel for more than a decade, according to Israeli media.”

For years BBC reporting on the topic of construction in Judea & Samaria and specific neighbourhoods in Jerusalem has adhered to a template that includes a partial portrayal of ‘international law’ and promotion of material produced by partisan political NGOs. For example:

BBC CONTINUES TO MISLEAD AUDIENCES ON SIGNIFICANCE OF BUILDING TENDERS (2014)

MORE BBC PROMOTION OF THE ‘PEACE NOW’ NARRATIVE ON CONSTRUCTION (2016)

BBC AUDIENCES AGAIN GET NEWS FROM A POLITICAL NGO (2018)

Although BBC editorial guidelines on impartiality state that “[w]hen dealing with ‘controversial subjects’, we must ensure a wide range of significant views and perspectives are given due weight and prominence”, the BBC does not even pretend to adhere to those supposed standards on this issue. Instead, BBC audiences are exclusively and repeatedly fed a monochrome politically motivated narrative that does nothing to enhance their understanding of the topic.

WHY IS THIS ISRAELI PLANNING DECISION DIFFERENT FROM OTHERS FOR THE BBC?

‘DUE IMPARTIALITY’ AND BBC REPORTING ON ISRAELI CONSTRUCTION