When Israel’s energy minister was unable to attend the COP26 summit in Glasgow earlier this month because it was not wheelchair accessible, the BBC produced coverage of that story on a range of platforms: 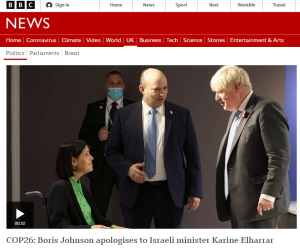 COP26: ‘Every disabled person has horror stories of not being able to access ‘accessible events” BBC World Service radio, 3/11/21

“BBC journalist and wheelchair user Ellis Palmer describes his reaction to the situation. He said he was “saddened but not surprised” by what happened, and that he comes across many stories of events and venues not being accessible. He believes this is caused by people not considering disabled people’s needs.”

In contrast, a story about opposition to improving accessibility at a famous religious site has not received any BBC coverage whatsoever.

Two days after those BBC reports appeared, Israel’s High Court rejected an appeal submitted by the PA’s Hebron municipality against plans to make the Cave of the Patriarchs in Hebron accessible to wheelchair users.

“The three-judge panel unanimously rejected the appeal. Judges Isaac Amit, Ofer Grosskopf and Alex Stein went even further, commenting that such renovations should have taken place long ago, and noted that disability access will also benefit Muslims who come to pray at the sacred site.

“Accessibility for people with disabilities is not an act of kindness but a right that is obligatory, which is currently reflected in international conventions and in Israeli legislation in the Equal Rights for People with Disabilities Law,” Amit wrote for the panel in their ruling.”

Israeli government plans to make the historic site accessible to people who cannot use the existing long stairways have been in the pipeline for some time but have encountered repeated opposition from Palestinian Authority officials. In September 2020 the Jerusalem Post reported that: 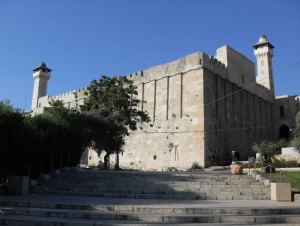 “Palestinian leaders have described plans by Israel to install wheelchair access at the Tomb of the Patriarchs as “tantamount to igniting a religious war in the region and in the world,” and a “war crime,” and have called for a third intifada in response. […]

In May [2020], the IDF issued an expropriation order for the site so that construction on the project could commence, making the ancient biblical site wheelchair accessible. The move bypassed Hebron’s Palestinian-run municipality, which opposed the project. The Palestinian Authority also opposed the project, denouncing it as “Judaization.” […]

…the Official PA daily al-Hayat al-Jadida reported that the PA’s Minister of Foreign Affairs and Expatriates Riyad Al-Malki said that constructing the elevator and “harming the Ibrahimi Mosque constitute a war crime and a violation of all the international laws. […] He noted that in this way, the occupation is attempting to strengthen the colonialism, occupation, and forgeries that it is committing on our land, our heritage, and our history.””

The Palestinian Authority acceded to the UN Convention on the Rights of Persons with Disabilities in 2014. To date, however, BBC audiences have seen no coverage of Palestinian opposition to plans to make the shared holy site accessible to people with disabilities or of related violent incidents.

With work on the $1.4 million project now apparently set to recommence, it seems likely that the story will reach the BBC’s radar. If so, it will be interesting to see whether the corporation will stick to its long-standing narratives on Hebron or whether the relevant context of disability issues will receive as much attention as it did in BBC reporting from Glasgow.

BBC ME CORRESPONDENT: JEWISH HISTORY IN HEBRON IS A ‘VIEW’