Long-time readers may recall that back in 2017 we submitted a complaint to the BBC concerning its portrayal of the two-state solution as something that “is the declared goal” of the Palestinian leadership.

We pointed out that the BBC’s portrayal does not inform readers that an essential part of the two-state solution is the concept of ‘two states for two peoples’ – a definition which would require Palestinian recognition of Israel as the Jewish state – and that Fatah and the Palestinian Authority have repeatedly refused to do so.

The BBC rejected that complaint, arguing that:

“It could be argued, for instance, that Hamas do not qualify as leaders on the same footing as the internationally recognised PA – it depends on how “leaders” is defined. The casual reader is likely to understand “leaders” in this context as those parties involved in the diplomatic process, of which Hamas is not one.”

“While Benjamin Netanyahu has made clear that a pre-requisite for any final peace settlement is a Palestinian recognition of Israel as a Jewish state, something the PA resists, it does not mean that a “two-state solution” in the general sense is not the declared goal of both sides. It is the detail and character of the two states which is up for discussion if/when peace talks resume.”

On December 8th the Palestinian Authority president Mahmoud Abbas – who of course heads one of “those parties involved in the diplomatic process” – took part in the inauguration of a new Palestinian embassy building in Tunisia.

As reported by MEMRI:

“…an outdoor wall featuring a giant marble map of Palestine from the Jordan river to the Mediterranean was highlighted.

The map shows major cities, including those within Israel such as Haifa, Jaffa, Lod, Ramla, and Nazareth. Photos of [Tunisian president] Saied and ‘Abbas standing in front of the giant map appeared in reports about the inauguration in both the Tunisian and Palestinian media.” 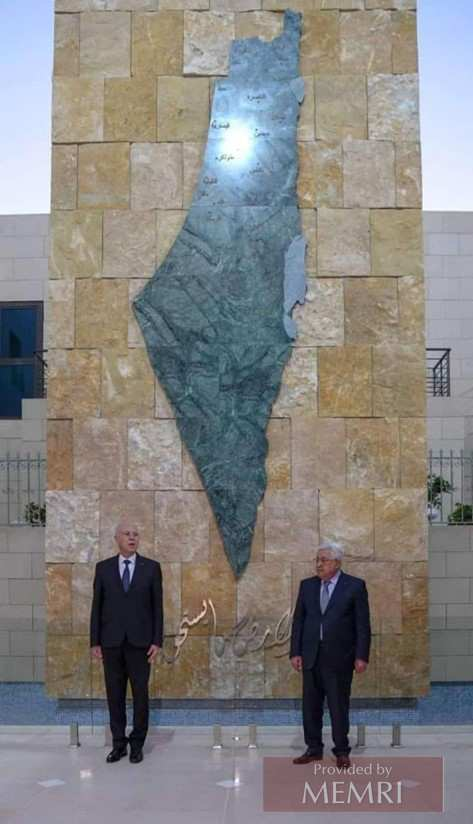 Once again it is clear that the BBC’s now standard portrayal of the two-state solution as the “declared goal” of the Palestinian Authority and the PLO – and its avoidance of serious examination of anything beyond that slogan – reveals more about the corporation’s own chosen narrative than anything else.