On the afternoon of June 24th another report by Raffi Berg promoting a supposed investigation into the death of Shireen Abu Akleh appeared on the BBC News website’s ‘Middle East’ page.

Headlined ‘Shireen Abu Aqla: UN says an Israeli shot killed Al Jazeera journalist’, the report relates to a statement issued by the Office of the High Commissioner for Human Rights on the same day. 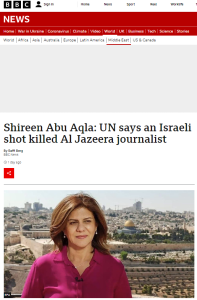 However, at no point in the entire report are readers provided with any background information concerning the UN HRC’s infamous record on Israel or the fact that it currently includes the undemocratic state which owns the media outlet that employed Abu Akleh and which (as the BBC knows full well), just hours after the incident, accused Israel of “state-sponsored terrorism”.

The BBC surely understands full well that no definitive conclusion about the circumstances of Abu Akleh’s death can be reached by the UN or anyone else so long as the Palestinian Authority refuses to cooperate with ballistic analysis of the bullet it holds. Nevertheless, Berg’s report repeatedly and exclusively presents that as an ‘Israel says’ issue:

“Eyewitnesses say the fatal shot was fired by Israeli forces, though Israel disputes this. It says it has not yet been possible to establish the source of the gunfire because the Palestinians rejected its request to examine the bullet that killed Abu Aqla or to hold a joint investigation.”

“The Israel Defense Forces (IDF) responded to the OHCHR’s allegation, saying it could not be proven which side shot Abu Aqla.

“An IDF investigation states that the journalist was in no way shot intentionally, and it is not possible to determine whether she was killed by Palestinian gunmen shooting indiscriminately in her area or inadvertently by an IDF soldier.”

Israel has said it has identified a soldier’s weapon which might have fired the shot, but that it cannot be certain without analysing the bullet. The Palestinians say they will not hand it over because they do not trust the Israelis.”

“Speaking to reporters in Geneva on Friday, Office of the High Commissioner for Human Rights (OHCHR) spokeswoman Ravina Shamdasani said the department had found that “the shots that killed Abu Aqla and injured her colleague Ali Sammoudi came from Israeli security forces and not from indiscriminate firing by armed Palestinians, as initially claimed by Israeli authorities”.

“It is deeply disturbing that Israeli authorities have not conducted a criminal investigation,” she added.”

Berg did not bother to explain how such a “criminal investigation” is supposed to take place while the PA refuses to share crucial evidence and neither did he clarify to readers that – as reported by the Times of Israel – a criminal investigation is currently not warranted.

“Shamdasani said it was “deeply disturbing that Israeli authorities have not conducted a criminal investigation.” Top army prosecutor Yifat Tomer-Yerushalmi recently said there was currently “no immediate suspicion of criminal activity” during the incident in Jenin, meaning the IDF would not open a criminal probe unless evidence suggested otherwise.”

As in Berg’s previous reporting on the Palestinian Authority’s ‘investigation’ into the same issue, readers find superfluous qualifying punctuation in relation to the mission of the IDF forces operating in Jenin on that day.

“The Israeli military said its forces had gone into Jenin to apprehend “terrorist suspects” following a wave of deadly attacks against Israelis by Palestinians, two of whom came from the Jenin district.”

Clearly this report fails BBC audiences by once again refraining from adequately clarifying in its own words that no definitive conclusions can be reached concerning Abu Akleh’s death without professional ballistic analysis. Nevertheless, the BBC continues to irresponsibly amplify remarkably similar ‘reports’ and ‘conclusions’ from non-neutral parties without questioning their gravitas, accuracy and impartiality.