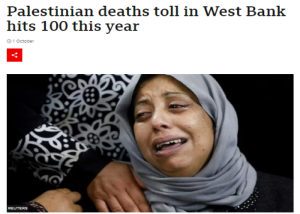 The predominant framing in that report concerned individuals described as “children”, with Bateman quoting “human rights groups” (which he did not bother to clarify are linked to a terrorist organisation) and claiming that “nearly a fifth” – i.e. 19 – of the casualties were under 18 years of age.

As we showed at the time, seventeen people who were 18 years old or younger at the time of their deaths were involved in violent activity and a significant proportion were claimed by terrorist organisations.

On October 13th the BBC News website published another report by Bateman which again focused audience attentions on reports of the deaths of “Palestinian teenagers” while failing to provide the full stories, including any affiliations to terrorist organisations: 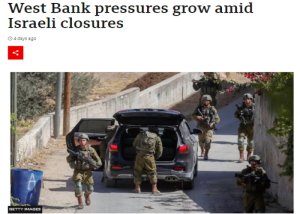 “On Wednesday [12/10/22] the Palestinian health ministry announced the death of an 18-year-old Palestinian shot by Israeli forces in al-Aroub refugee camp near the city of Hebron.

The army said it opened fire at Palestinians throwing stones at cars, but didn’t say why it was necessary to use lethal force to stop this. […]

On 7 and 8 October, Israeli forces killed four Palestinian teenagers during a series of incidents in the West Bank within 24 hours. They included a 14-year-old boy shot dead near the separation barrier. The army claimed soldiers had fired at a Palestinian who threw petrol bombs at them.

On Monday [10/10/22], a 12-year-old Palestinian boy died of his wounds after being shot during an Israeli raid in Jenin in September.”

Since Bateman’s October 1st report was published the ITIC has recorded the deaths of a further ten people aged 18 or younger, three of whom were linked to terrorist organisations. Some of those mentioned by Bateman in his October 13th article appear in those records, including members of the Palestinian Islamic Jihad and Hamas. 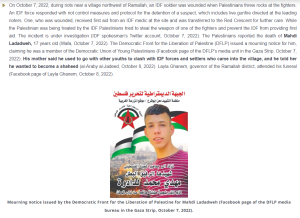 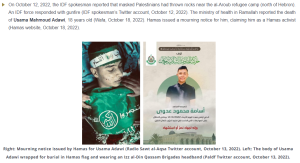 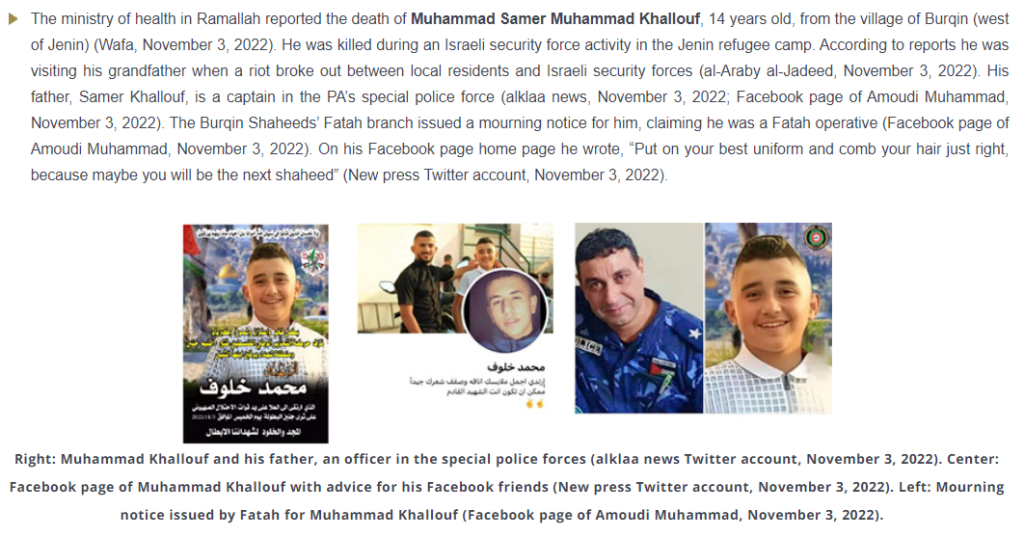 In addition, a 15-year-old youth died on November 9th as rioting and shooting took place during a visit by Israelis to Joseph’s Tomb near Schem (Nablus) per the terms of the Oslo Accords.

“Palestinian gunmen opened fire toward Jewish worshipers, including current and future lawmakers, visiting Joseph’s Tomb on the outskirts of the West Bank city of Nablus in the early hours of Wednesday.

Israeli troops returned fire at the gunmen, according to the military and Palestinian reports.

A Palestinian teenager was killed amid the clash, apparently due to an explosive device he was holding exploding prematurely.

According to the Palestinian Authority Health Ministry, 15-year-old Mahdi Hashash died after being seriously injured by shrapnel across his body, and not by gunfire. […]

Hashash was claimed by the al-Aqsa Martyrs’ Brigades terror group, which is loosely tied to the Fatah party of PA President Mahmoud Abbas, as a member.”

Although the BBC Jerusalem bureau has clearly chosen to prioritise reporting on Palestinian casualties from a specific age-group in several of its recent reports, audiences have nevertheless yet to see any serious reporting on the topic of the exploitation of minors for the purposes of terrorism and violence and the recruitment of children by Palestinian terrorist organisations.