The same report – including the false claim from former PLO employee Diana Buttu – was also aired on BBC World Service radio in one of the July 1st editions of ‘Newsday’.

The introduction to that report given by presenter Lawrence Pollard (from 31:15 here) promotes a theme seen in other programmes on BBC World Service radio and BBC Radio 4 on that day.

[emphasis in italics in the original]

Pollard: “…first we’re going to talk about one of the top stories in the news at the moment. Today is the day…ah…where Israel said that it would start annexing parts of the occupied West Bank. Now diplomatic issues, discussions, have delayed what is a very controversial decision.”

Israel of course never said “that it would start annexing parts of the occupied West Bank” on July 1st. Firstly, Israel does not use the term ‘annex’ for reasons which were never properly explained to BBC audiences throughout over a month and a half of generous coverage of the topic. Secondly – as we pointed out to the BBC in complaints made in May – the very most that was going to happen on July 1st was that – in accordance with the coalition agreement – the topic of application of Israeli civilian law to parts of Area C could have been brought to the cabinet for discussion as the first part of a process which includes further discussion in the Foreign Affairs and Defence Committee and in the Knesset. 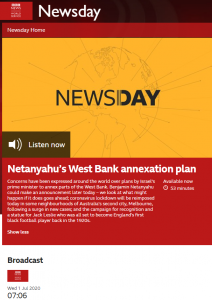 Nevertheless, the BBC widely promoted the misleading notion of ‘annexation on July 1st’. The synopsis to this edition of ‘Newsday’ claimed that “the Israeli prime minister, Benjamin Netanyahu, could make an announcement on his plans to annex parts of the West Bank later today” and the synopsis to the previous edition read:

“Concerns have been expressed around the world over plans by Israel’s prime minister to annex parts of the West Bank. Benjamin Netanyahu could make an announcement later today – we look at what might happen if it does goes ahead.”

When that did not happen, the BBC had to ‘explain’ to its audiences why the non-starter story it had been pushing for weeks had failed to transpire.

Also noteworthy is Pollard’s promotion – in line with general BBC editorial policy – of the convoluted notion that the application of Israeli civilian law to specific parts of Area C within the framework of a peace proposal which includes the creation of a Palestinian state would spell the demise of the two-state solution, along with the BBC’s usual partisan mantra on ‘international law’.

Pollard: “Many believe that the idea of creating an independent Palestinian state alongside Israel – the so-called two-state solution – would basically be killed off by such a move. It’s endorsed – indeed enabled – by President Trump and the ‘deal of the century’ peace plan. Ah…unsurprisingly it’s rejected by the Palestinians and much of the global community still regard Israeli settlements in the area as illegal – a violation of international law.”

Another example of the BBC’s backtracking of its ‘July 1st annexation’ story was found in that day’s evening edition of the BBC World Service radio programme ‘Newshour’ which purported to explain to listeners “[w]hy Israel’s Prime Minister has postponed his big announcement on annexing the West Bank”.

Presenter Tim Franks introduced the item (from 30:06 here) with the claim that something that was obviously not going to happen had been ‘postponed’.

Franks: “The rule of thumb in journalism is that a story becomes less of a story when someone tries not to do something rather than do it. But it is perhaps significant that what could have been a major re-drawing of one of the most sensitive maps in the world has been postponed. Israel’s prime minister Binyamin Netanyahu had signalled that today, July the first, would be the day when he would present detailed plans for his proposed annexation of parts of the occupied West Bank, home to Jewish settlements but also land which much of the rest of the world would like to see as the basis for a future Palestinian state. The proposal though seems to be stalled.”

Seeing as the joint US-Israel mapping committee has not completed its task, agreements with the US administration have not yet been reached and the issue has not yet been discussed in the Knesset, it is unclear where Franks and his colleagues got the idea that “detailed plans” would be presented on July 1st. The item continued with yet another monologue from Diana Buttu.

Franks: “Diana Buttu is a former legal advisor to the Palestinian president Mahmoud Abbas. She told the BBC that annexation wouldn’t change the situation on the ground for many Palestinians but it should none the less be condemned by the international community.”

Buttu: “For 53 years we’ve seen that Israel has put in place a system of apartheid with the construction of Israeli settlements, with now 600,000 Israeli settlers living in the West Bank, making about 25% of the population. These settlers have superior rights than Palestinians do. And so the only difference between what is happening before annexation now is that now the Israeli government intends to make this actually normal. It’s important to keep in mind that it is illegal to annex territory and by agreeing to this or by sanctioning it or by allowing it to happen, the world is saying to Israel and to other countries around the world that it is OK to take land by force, thereby undoing the international legal system. That being said, by having this plan of annexation the other thing that Israel is doing is that they’re saying to Palestinians you will never be free. You will continue to live under Israel’s military rule.”

Franks made no effort whatsoever to challenge Buttu’s politically motivated ‘apartheid’ slur or to clarify to listeners that the application of Israeli civilian law would in fact mean an end to the “military rule” in those specific areas. He continued with further promotion of the “delay” fantasy – “[w]hat then is the reason for the delay today in the Israeli prime minister’s plans?” – before bringing in an interviewee signposted as “highly experienced”, Martin Indyk.

Although Indyk noted during the conversation that the US president “hasn’t given the green light to it”, both he and Franks continued to refer to “postponement of this annexation announcement today” despite the fact that no such announcement would or could have been made on July 1st. Listeners got a glimpse of the position behind Indyk’s commentary in just one sentence:

Indyk: “The best we can do at the moment is to try to preserve the two-state solution, try to put a break on the annexation process.”

This edition of ‘Newshour’ was by no means the only BBC radio programme aired on July 1st to fail to provide listeners with content that meets the BBC’s editorial guidelines on impartiality.

“When dealing with ‘controversial subjects’, we must ensure a wide range of significant views and perspectives are given due weight and prominence, particularly when the controversy is active. Opinion should be clearly distinguished from fact.”

Neither was it the only programme to devote airtime to ‘explaining’ why an event that it had spent a month and a half telling audiences – and itself – was going to happen on July 1st did not take place. Of course in no case did those ‘explanations’ include the fact that the BBC had repeatedly ignored the evidence which from the very beginning clearly showed that the application of Israeli civilian law to specific parts of Area C was not going to happen on that date.