Previously we have looked at how the BBC has chosen to erase from audience view a British firm’s majority ownership of the company at the centre of a generously reported spyware story:

That framing has since continued across various BBC platforms.

“Their numbers are apparently on a list of some 50,000 phone numbers of people believed to be of interest to clients of Israeli-based firm NSO Group.”

“The Israeli company says its software is intended for use against criminals and terrorists and made available to only military, law enforcement and intelligence agencies from countries with good human-rights records.” 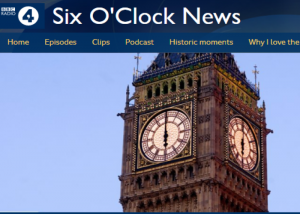 “…the Israeli firm that makes and sells the software…” 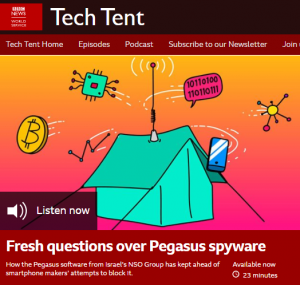 “How the Pegasus software from Israel’s NSO Group has kept ahead of smartphone makers’ attempts to block it.”

“…so why has an Israeli company been so successful in getting its spyware onto the iPhone?”

“…NSO Group, the Israeli company behind the software…”

As was the case in previous coverage, none of those BBC reports clarified that while the company is based in Herzliya in Israel, the majority stake in NSO Group is owned by the London-based firm Novalpina Capital which clarified in May 2019 that:

“Novalpina Capital has control of the board of NSO. We own approximately two-thirds of the holding company of NSO […] and have appointed the majority of Board Directors.”

Moreover, another BBC World Service radio programme took that framing one step further, promoting the notion that the Israeli government and even “the State of Israel” bear some sort of responsibility for the alleged abuse of software sold by a private company to foreign governments.

“…clients of the Israeli based firm NSO…”

“…stakeholders who can make a difference, for example the Israeli government. I think it is probably not an exaggeration to say that it is quite embarrassing for the Israeli government and the ministry of defence to have this huge deluge of information showing very, very damning abuse and reflecting badly on the State of Israel and on the ministry of defence.” [emphasis added]

“…the onus on the government of Israel to intervene here…”

The July 25th edition of same BBC World Service programme even managed to shoehorn Palestinians into the story (originally from 09:17 here but currently unavailable for reasons unknown).

One of the programme’s two guest contributors – described by presenter Rebecca Kesby as “lovely people” – was introduced as follows:

Kesby failed to inform listeners that Scheindlin is also a regular contributor to the English language far-Left website +972 Magazine which caters to a mostly foreign audience. She has also written politically partisan articles for Ha’aretz, the Guardian and the New York Times, among others. Had BBC audiences been informed of her “particular viewpoints” as required by BBC editorial guidelines, they would have been better placed to understand what followed and why. [emphasis in italics in the original, emphasis in bold added]

Kesby: “And from conventional warfare let’s come right up to date with the new cyber warfare, Dahlia, ‘cos this was a big story this week. The NSO Group spyware Pegasus. Apparently a number of heads of state have been targeted by customers of the software. NSO says it’s had nothing to do with it but…ehm…we talked about it on the programme yesterday. How is this story playing out in Israel? Because obviously it’s an Israeli company.”

Scheindlin: “Yeah of course well it…as much as it’s an enormous and extraordinary global story it has been, I would say, a little bit understated and in some ways even a bit overshadowed within the Israeli discourse and media. I mean it is in the papers and, you know, there is discussion about it but I would say there’s not the same kind of, you know, shock that we’ve seen around the world. And, you know, the CEO of the company – one of the co-founders – has been doing a lot of interviewing. His response has been, you know, sort of vacillating between a sort of defensiveness…ah…fighting back and saying we have nothing to do with this, categorical denials, you know, the leaked list of fifty thousand phone numbers has nothing to do with us and there may even be interested parties, sort of conspiratorial parties, behind the attack. Somewhere between that and at points, a more conciliatory tone saying well we do wanna look into this these…the products that our company develops have been developed entirely for security purposes, for fighting crime. They keep…they continue…ah…the heads of the company, to emphasise that the product was developed in order to fight crime, terrorism and [laughs] paedophiles. That is the message they would like to get across constantly that this software was intended for good use and that if there…if the accusations turn out to be true then that would represent a violation of the agreements under which they are sold.”

Among the “lot of interviewing” to which Scheindlin referred is apparently this one. She continued:

Scheindlin: “There is a tiny bit of soul-searching, I would say, going on mostly from some commentators, you know, in the media and people who’ve talked about things like re-examining Israel’s contribution to, you know, human rights violations, undermining democracy and freedom of the press. But I would say it really hasn’t caught on at the level of a large-scale national conversation which is interesting in itself. At the same time, I was thinking about the fact that it’s unusual for one reason. There might be a bit of an opportunity for Israel because usually when Israelis think about human rights they tend to think about them as an accusation against Israel for violating the human rights of Palestinians and they get defensive about that. This is one of the first times I can remember in a long time when Israel has to contend with its role in undermining human rights but it cannot claim that this is an unfair criticism of Israel which is simply trying to protect its security and which is how many Israelis see the problem with the Palestinians. This is simply a matter of Israel [laughs]…an Israeli company with government approval – because they have to be approved by the defence ministry – selling products around the world, you know, for obviously, you know, corporate interests and not taking responsibility for the impact.”

In that uninterrupted monologue Dahlia Scheindlin took BBC framing of the Pegasus story one very radical step further, imputing a broader “role in undermining human rights” to Israel while tritely distilling the conflict between Israel and the Palestinians to a completely context-free caricature of Palestinian victims serially abused by Israel.

The symbiotic result was that Scheindlin got to exploit the ‘hot’ Pegasus story to advance her own particular political agenda while the BBC used an ‘expert’ Israeli commentator to broaden its exclusively Israel-focused framing of the story with populist canards.