Throughout 2021 CAMERA Arabic contributed to seven articles appearing in the Jewish Chronicle, with all but one concerning the BBC’s Arabic language service. An additional story was published by The Daily Mail and later PinkNews.

On three occasions the BBC chose to answer the Jewish Chronicle’s inquiries as follows:

“BBC Arabic shares exactly the same principles of accuracy and impartiality as BBC News in English and we strongly reject the suggestion that its impartiality is compromised.”

Readers can judge the veracity of that claim for themselves based on the summary below.

Among the key findings provided by CAMERA Arabic for this Jewish Chronicle exposé are:

The next weekend saw The Spectator follow up on the story with an op-ed by Jake Wallis Simons.

May 27th 2021, the Jewish Chronicle:  ‘Anti-Israeli bias among BBC staff who deal with the Middle East revealed’ 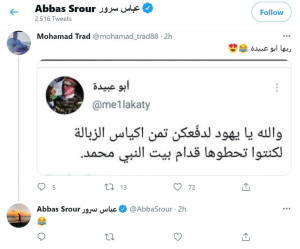 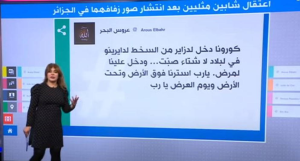 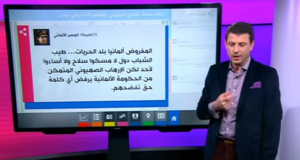 October 15th 2021, the Jewish Chronicle:  ‘Why does BBC find it hard to apologise to Jews?’ 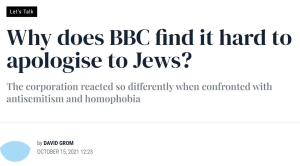 An op-ed by a CAMERA Arabic staff member, comparing the different BBC responses when homophobia and antisemitism – both featured on BBC Arabic’s “Trending” programme – were presented to the corporation.

The UK based television station ‘al-Hiwar’ regularly praised terrorists as “martyrs” and has promoted the notion of the murder of Israeli civilians as “legitimate resistance”. The Jewish Chronicle followed up that story with coverage of complaints made by UK Lawyers for Israel  to Ofcom and the British police. CAMERA Arabic assisted with those complaints.

Al-Hiwar presenter and Palestinian Return Centre official Zaher Birawi calls the Sbarro suicide bombing of 2001 “legitimate resistance according to international law” (March 2021; video here, conversation on the legitimacy of the attack starts at 8:05)

Earlier this year, CAMERA Arabic called into question the impartiality of two BBC Arabic correspondents – Layla Bashar al-Kloub and Feras Kilani – on the grounds that they occasionally cover Israel-related affairs for the BBC despite having problematic social media records. That includes al-Kloub’s praise for the unrepentant Holocaust denier Muna Hawwa.

On November 28th, in response to al-Kloub uploading a video segment of herself covering anti-Israel protests in Jordan, CAMERA Arabic noted one of her tweets from 2016, asking:

“It is reasonable that a Jordanian journalist, who tweets that ‘the Zionist entity does not recognize any international law or agreement’ and that its people are ‘terrorists’, later gets the Israel-Jordan relations file in BBC, with British and international audiences expected to consider her coverage ‘impartial’”?

For three days, BBC Arabic and al-Kloub ignored our Tweet in Arabic. After CAMERA UK reposted it in English, al-Kloub deleted both her old tweet and the video segment in less than three hours.

As reported by the Jewish Chronicle, CAMERA Arabic prompted the BBC to correct several errors in Feras Kilani’s analysis of Hamas. Additional details of those corrections will appear in a future post. 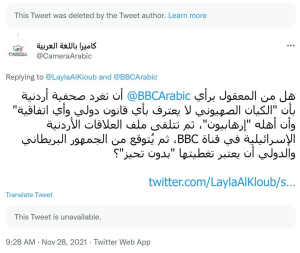