The BBC’s account of that story includes several points worthy of note. 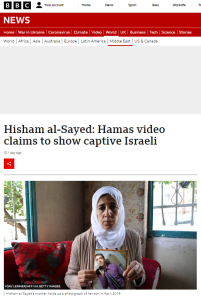 In line with BBC policy, the terrorist organisation Hamas is whitewashed as a “militant group”.

“Palestinian militant group Hamas has released a video appearing to show an Israeli citizen being held captive in the Gaza Strip.”

A claim from that terrorist organisation which is known to be untrue and which the BBC could – and should – have easily fact checked itself (especially as the relevant documentation was provided five years ago by the NGO cited in the next paragraph) is presented on equal footing with statements from other parties, thereby compromising audience understanding of the facts.

“Hamas alleges that Mr al-Sayed is an Israeli soldier, but both the Israeli government and his family say he is a civilian with mental health problems.”

“Israel says he is one of two citizens, the second being Avera Mengistu, currently being held captive by Hamas in violation of international law.”

The BBC does not bother to inform readers how long Avera Mengistu has been held captive by Hamas or to explain in its own words how the holding hostage of two mentally challenged civilians without allowing communication with their families violates conventions.

But the most noteworthy thing about this BBC report is that it appeared at all.

As we documented two years ago, until now BBC audiences have never heard the names Hisham al Sayed or Avera Mengistu:

In the two years since then, occasional references have been made (or not) to Israeli captives held in the Gaza Strip, but again, without mentioning their names.

“The right-wing chairman of Israel’s parliamentary committee on security opposed the transfer, claiming vaccines would first go to Gaza’s militant leaders – he linked the issue to that of two Israeli civilians and the remains of two soldiers believed to be held in Gaza.” [February 2021]

“The reason why I asked about conditionality is because I’ve read in places that Israel will only agree to full reconstruction of Gaza if there’s like a prisoner swap for instance.” [October 2021]

So, nearly seven years after their incarceration in Gaza became public knowledge, this article is – as far as we are aware – the first item of BBC content which mentions the names Hisham al Sayed and Avera Mengistu.

By any standards, that’s one heck of an omission.