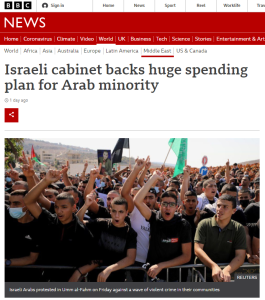 While that report gives readers an idea of planned government spending in various fields in Israel’s Arab sector, it does not provide any information concerning similar past investments and the issues encountered.

“Economic plans to mend persistent socio-economic gaps between Arab and Jewish Israelis have been proposed several times over the past few decades. The most recent such plan — known as 922 — allocated over NIS 10 billion in economic stimulus to Arab communities between 2016 and 2020. […]

Over the past few years, criminal gangs sought to redirect budgets for public projects to their own pockets — allegedly using pressure tactics to win contracts and shooting up the homes of Arab mayors who resisted.

“Municipality heads were always targeted by criminal organizations. But since 922, as more money has been spent on local authorities, the local authorities have become a larger prize,” said Rida Jabr, who directs the Aman non-profit, in a phone call last year.

Officials say they are aware of the problem and will take measures to ensure that the billions of shekels set to hit Arab communities don’t reach criminal organizations.”

Readers find a paragraph that has no direct bearing on the report’s subject matter:

“Israeli Arabs descend from Palestinians who became Israeli citizens following the creation of the state in 1948-49. Many still self-identify as Palestinian or express solidarity with those living in the occupied West Bank and Gaza.”

As we have recently had cause to note on several occasions, the BBC’s relatively novel practice of framing Israeli Arabs as Palestinians does not provide audiences with a representative picture of the way in which people self-identify in that richly varied sector of the Israeli population (not all of whom, contrary to the BBC’s claim, descend from Arabs who stayed in what became Israel in 1948).

A survey conducted by the Israel Democracy Institute in 2019 showed that 13% of the respondents described their primary self-identification as Palestinian, with the institute noting that “[t]hese findings have not changed significantly since 2017”.  65% of Arabs polled said that they were “proud to be Israelis” and 85% thought that “Israel is a good place to live”. 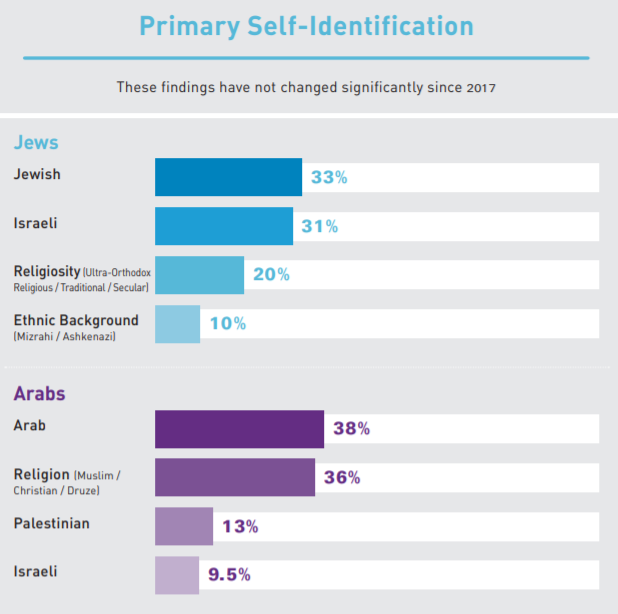 In April 2020 the Jerusalem Post reported on a different survey.

“According to the survey, conducted by Prof. Camille Fuchs of Tel Aviv University, about a quarter of Israeli minorities (23%) define themselves primarily as “Israeli” and half (51%) self-identify as “Israeli-Arab.”

The proportion of non-Jewish people who define themselves primarily as “Palestinian” now stands at around 7%, down from 18% this time last year.”

So while the BBC’s claim that “[m]any still self-identify as Palestinian” is not strictly speaking inaccurate (given that many means “a large number of” and 7% translates to around 140,000 people), it certainly does not contribute to audience understanding of Israeli society.