The lead item (from 00:10 here) in the May 11th afternoon edition of BBC World Service radio’s ‘Newshour’ concerned the death earlier in the day of the Al Jazeera journalist Shireen Abu Akleh. Presenter Audrey Brown wasted no time in promoting Al Jazeera’s talking points on the story. [emphasis in italics in the original, emphasis in bold added] 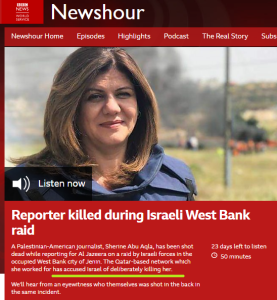 Brown: “And we’re going to start with the death of the Palestinian American journalist Shireen Abu Akleh who was killed while reporting on an Israeli raid in the West Bank this morning. Al Jazeera, the organisation she worked for, has accused Israel of deliberately killing her in the occupied West Bank town of Jenin. Mohamed Moawad is the managing editor of Al Jazeera channel that employed Shireen.”

Listeners heard a recording of Moawad that had also been promoted on domestic BBC radio.

Recording Moawad: “She wasn’t [unintelligible] covering from the side of the Palestinians. She was there accompanying the Israeli forces while they were intervening in Jenin so what we think is that this is the responsibility for the occupation forces because under the international law they are responsible for the civilians, for the journalists covering on the ground.”

Brown swiftly moved on to a long interview with another Al Jazeera employee, parts of which also appeared in other programmes, but not before promoting false equivalence between Israelis murdered in terror attacks and Palestinians killed during counter-terrorism operations.

Brown: “Now tensions have been rising in the region recently. Seventeen Israelis, two Ukrainians and 26 Palestinians have died in weeks of attacks and raids. We’ll hear from a spokesperson for the Israeli embassy to the UK in just a moment but first to the Al Jazeera producer Ali Samoudi who was with Shireen Abu Akleh when she was shot. He himself was shot in the back in the same incident. He spoke to me from his hospital bed and I began by asking him how he was feeling hours after being shot.”

Brown’s second question was about the incident itself: “Tell us how it happened, how you came to be shot”. On a very bad line and in broken English, Samoudi gave his account:

Samoudi: “We moving through the area where the soldiers doing the operation. We choose the area ogen [phonetic] – area ogen, the street it’s ogen and Israeli [unintelligible] saw us after we started when we move. Suddenly I listen to the shots. We are scared. After that Shireen…they shoot us. I am running. When I am running they shoot another bullet and I am injured in this moment. Shireen saw me and she said the last words. She said ‘Ali injured’. She tried to escape to the area and I am running. I am go to car and she, the car, take me to the hospital. But the Israeli soldiers still shooting and she injured. After that Shireen injured and she killed. The Israeli said in the area they [Palestinians] fire guns at us. It’s not true. No fire guns in the area and not [unintelligible] Palestinians in the area. Only we are the journalists [unintelligible] shot without reason.”

Video footage of Samoudi getting into the car that took him to hospital in fact shows [graphic content] that there was shooting at the time from unidentified sources. Brown however endorsed Samoudi’s version of events:

Brown: “And did you see the soldier that shot at you and shot at Shireen?”

Samoudi: “No I am not see the soldier there. We see car soldiers occupation. It’s about five or six in the end of the street.”

Brown: “So they were in a vehicle?”

Brown: “Tell me this: were they driving in the car the people who shot at you and Shireen or were they far away from you?”

Samoudi: “No, they about 100 meters, not more. Some soldiers in the street, some soldiers inside the car but I am not see who’s shooting.”

Brown: “The Israeli government is saying that it’s likely that you were shot at and that Shireen was killed by Palestinians.”

Samoudi: “It’s not true. In any operation they documentary everything. I ask let us see that photo.”

Samoudi: “The Israeli they don’t want cover to the situation in the Jenin camp.”

Brown continued her highly empathic, first name terms interview with Samoudi by asking him about Abu Akleh herself – “she wasn’t a danger to the soldiers” – and about his past experiences in similar situations. Samoudi claimed to have been shot seven times during the second Intifada.

At 05:43 Brown brought in her next interviewee – Ohad Zemet of the Israeli embassy in London – whom she did not allow to answer even one question without interruption.

Brown: “Now your government has said that it’s likely that Ms Abu Akleh was shot by Palestinian fighters. Ali Samoudi was there and he says not. What evidence does the government have to make that claim?”

After offering condolences, Zemet clarified that freedom of the press and the safety of journalists is something that Israel holds highly, pointing out that “it’s also in the protocols – operational protocols – of the [armed] forces”. Obviously uninterested by that, Brown interrupted him.

Brown [interrupts] “Indeed but let’s get to the claim that the government has made that she was shot – likely shot – by Palestinian fighters.”

Zemet explained that the incident is under investigation and that Israel had offered to investigate it jointly with the Palestinian Authority. He went on to explain that the Israeli forces were in Jenin to make arrests connected to recent terror attacks in Israel but Brown again interrupted.

Brown [interrupts]: “Yes Mr Zemet, can we come to the specific claim that is being made here? Because we heard from Mr Samoudi that there were cameras filming the clashes – there are often cameras filming these clashes. He wants to see it and he wants it shown. He’s very confident of the account that he has just given us. Will you make a camera version of it available?”

Zemet again noted that an investigation is in progress and referred to a video showing Palestinians claiming they had shot and killed a soldier. As he pointed out that no soldier had been killed, Brown again interrupted.

Brown [interrupts]: “Well but from…from what…from the analysis of the video that has been given to the BBC, what is said in there is an Israeli soldier has been shot and Mr Samoudi says that there were no civilians around them and there were no…ah…there were no fighters around there. There were six clearly identified journalists and more than [sic] two of them have been shot and one of them is dead.”

Zemet: “So this is clearly why we need to investigate. Israel don’t target journalists and we need to…you know the forces came under heavy fire so they were…”

Brown [interrupts]: “But not in this context though. Not in this context. And human rights organisations say that 50 Palestinian journalists have been killed since the year 2000. Six of them killed in the last two years in the occupied territories. You say that Israel doesn’t target journalists but these are the figures and they’re quite stark.”

Zemet once again explained that the soldiers operating in Jenin that morning had come under heavy fire.

Zemet: “…you cannot say they didn’t because there are footages that show they under extreme fire. And as I said, we need to investigate. And of course you know you cannot claim that Israel as a democratic country that holds freedom of press are targeting journalists. This is absurd claim to make.”

Brown [interrupts]: “Well it’s a claim that not I’m making – that various human rights organisations are making. But unfortunately we have to leave it there Mr Ohad Zemet.”

Listeners were not told the names of those ‘human rights organisations’ and of course heard nothing about the topic of Palestinian journalists who are also activists for terrorist organisations.

Later on in the same programme (from14:04) listeners heard a report from Tim Franks in Jerusalem. 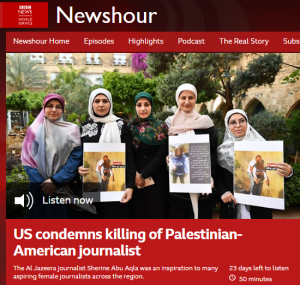 In the later edition of the same programme, listeners once again heard (from 00:38 here) edited clips from Brown’s interviews with Samoudi and Zemet along with a long interview with a friend of Abu Akleh.

As we see, the May 11th ‘Newshour’ coverage of this story was no better that that seen on other BBC platforms (see ‘related articles’ below). BBC World Service radio adopted and uncritically amplified the narrative promoted by Al Jazeera while ignoring that outlet’s record on Israel. Questions posed by Audrey Brown in her token interview with an Israeli spokesperson repeatedly and uncritically cited the Al Jazeera producer’s claims despite their being unsubstantiated and notwithstanding the clear bias he expressed in similar interviews with other media outlets. Brown promoted the libel that Israel targets journalists which is frequently used by Al Jazeera and others seeking to delegitimise Israel.

The BBC’s obligation to provide accurate and impartial programming was once again side-lined in favour of promotion of the unverified politically motivated narrative that the BBC quickly embraced regarding the death of Shireen Abu Akleh.