As documented here at the time, the BBC produced superficial cross-platform reporting on that story about ‘human rights groups’, some of which it had quoted and promoted in the past.

YET ANOTHER SHALLOW BBC REPORT ON PFLP LINKED NGOS

Following unsuccessful appeals from some of the NGOs concerned, on August 17th Israel’s minister of defence ratified the October 2021 designation and the offices of those organisations were shut down.

On the evening (local time) of August 18th the BBC News website promoted a report titled ‘Palestinian rights groups’ offices raided by Israeli troops’ with the inaccurate claim that the NGOs had been designated by the Israeli army – rather than the government’s ministry of defence.

“Israeli troops have sealed shut the offices of several Palestinian human rights and aid organisations, after saying last year it would designate them as terrorist organisations.”

“Israeli authorities allege the groups are a front for a militant faction.”

The Israeli authorities do not describe the PFLP as a “militant faction” but rather as a terrorist organisation that is also proscribed by the EU, the US and Canada. The BBC’s all too predictable avoidance of accurate language clearly detracts from audience understanding of the story.

The BBC’s report promotes links to both a statement from Al Haq and a Tweet from its director. Although the the names of the NGOs involved are listed, no information is provided concerning the activities of Al Haq, Addameer, the Bisan Center for Research & Development, Defence for Children International-Palestine, the Union of Agricultural Workers Committees (UAWC) and the Union of Palestinian Women’s Committees (UPWC) and their links to the PFLP, including active participation in a terror attack. 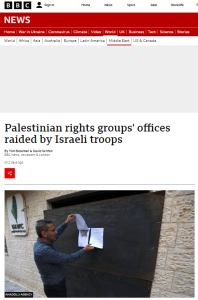 “In October, Israel designated six Palestinian rights organisations as terrorist groups, saying they were diverting funds to an outlawed militant faction, the Popular Front for the Liberation of Palestine (PFLP), which has carried out deadly attacks. […]

Israel offered no documentary evidence for the claim – telling the BBC at the time its evidence was classified.

The groups see the raids as an attempt to silence them as some back international attempts to prosecute Israel for possible war crimes.”

In other words, in the ten months which have passed since last October, the BBC appears to have made no effort to study the open-source information concerning the six NGOs it blandly portrays as “human rights and aid organisations” and whose talking points it uncritically promotes. Readers are not informed, for example, that over four years ago, some of those NGOs had credit card donations facilities withdrawn or that even Fatah describes two of them as PFLP affiliates.

The report ends with two paragraphs on an unrelated topic:

“Meanwhile, a 20-year-old Palestinian man was shot dead by Israeli troops in the city of Nablus before dawn on Thursday, Palestinian health officials said, as violence intensified in the West Bank.

He was reportedly hit during a gunfight as soldiers escorted worshippers to a Jewish shrine known as Joseph’s Tomb.”

Bateman and Gritten did not bother to clarify that the “gunfight” was the result of Palestinians attacking army-escorted worshippers (despite the Palestinian Authority’s obligation to protect pilgrims under the terms of the Oslo Accords) or that Fatah issued a mourning statement for the deceased.

The August 18th afternoon edition of the BBC World Service radio programme ‘Newshour’ also included an item (from 14:04 here) on the same story, introduced by presenter Paul Henley as follows:

Listeners heard a voice-over translation of a statement from Ayed Abu Eqtaish of DCI-Palestine in which the story was framed as “part of the Israeli occupation campaign to silence the voice of Palestinian institutions that expose Israeli violations of Palestinian rights”. Audiences also heard from an Israeli journalist.

As we have seen only recently (as well as in the past), the BBC is quite happy to apply ‘halo’ terms such as ‘human rights activist’, ‘aid worker’ or ‘charity worker’ to virtually anyone opposing Israel – regardless of their actual activities and ideologies.

As was the case last October when this story began, once again a remarkable lack of journalistic curiosity and an ostrich approach to open-source information has produced one-sided reporting which fails to meet the BBC’s obligation to fully inform its audiences.