A decade of BBC reporting on the civil war in Syria has produced some memorable moments such as the time in 2014 when ‘Newsnight’ relocated that country to Jordan or when Kevin Connolly passed off British-built structures as “relics of the fighting in 1967 and in 1973 when Syria tried and failed to win back the land it lost”.

On a more serious note, in early 2013 BBC journalist Wyre Davies speculated that an Israeli report on the use of chemical weapons in Syria was designed to pressure the US into taking action. Four years later the BBC’s Middle East editor promoted a “theory” of his own concerning a chemical weapons attack by the Assad regime.

The BBC’s coverage of such attacks – particularly during 2017 and 2018 – regularly amplified what was known to be Syrian regime and Russian propaganda such as in this example from April 2017. 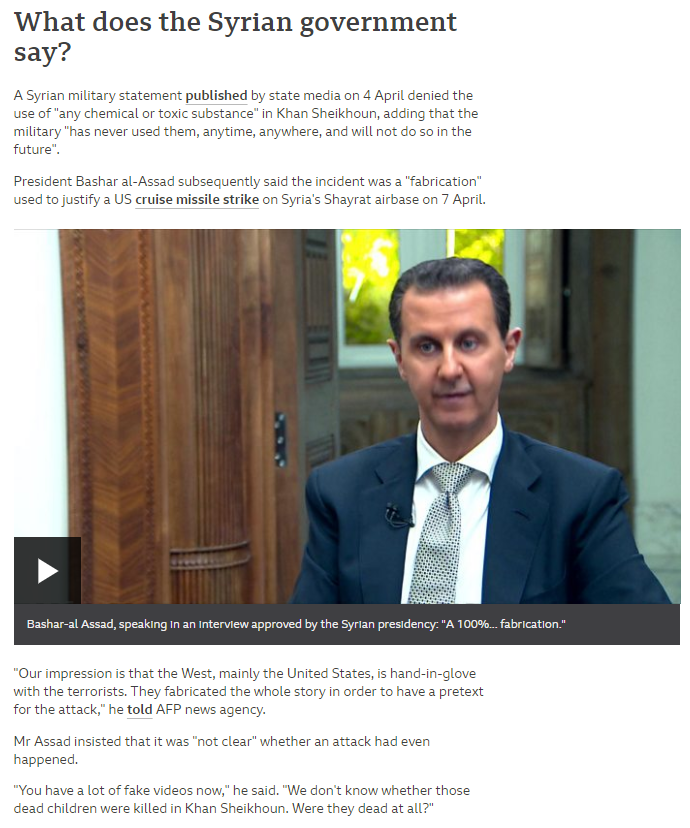 WHY DOES THE BBC DESCRIBE THE KHAN SHEIKHOUN CHEMICAL ATTACK AS ‘SUSPECTED’?

ARE BBC AUDIENCES GETTING THE FULL PICTURE ON SYRIA’S CHEMICAL WEAPONS?

DESPITE EVIDENCE, THE BBC WON’T LET GO OF ASSAD PROPAGANDA

One particularly low point in BBC coverage came in May 2013 when BBC Radio Ulster provided a stage for Mairead Maguire to promote inadequately challenged Syrian regime propaganda including:

“No – Assad is not murdering his own people.”

“But I mean this idea that there are chemical weapons – the Syrian government, immediately this myth was put out – immediately wrote to the UN and said send in anybody you want because we can prove we don’t have chemical weapons. And the UN never even answered their letters. But that kind of thing has sort of slowed down now because they knew it was disinformation to destroy Syria.”

In 2018 the BBC solicited ‘analysis’ from a conspiracy theorist who had suggested that chemical weapons used against civilians in Syria may have been an Israeli “false flag” operation aimed at implicating Bashar Assad’s regime.

BBC audiences also saw numerous reports over the years amplifying the Assad regime’s unfounded propaganda concerning supposed Israeli support for one or other of its enemy factions and intervention in the civil war in Syria. 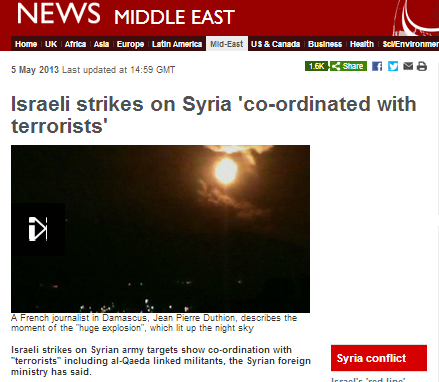 In May 2013 BBC Middle East editor Jeremy Bowen cast doubts on the transfer of Iranian weapons to Hizballah:

“It is a bit strange as well because Hizballah is powerful in Lebanon and to…pretty much controls the airport. Now, [scoffing laugh] do they have to get weapons in through Syria if they could get them flown in direct from Iran, if that’s what they particularly wanted?”

The BBC also promoted the claim that Israeli actions to thwart weapons transfers to Hizballah were designed to drag the USA into the conflict.

“Israel has not said publicly that it has attacked Syrian targets, but that is what has happened, twice in recent days. There seems to be no doubt about it and no real doubt about why either. In the short term at least, an effort to stop sophisticated Iranian-made weapons getting from Syria into the hands of Hizballah – the militants based in Lebanon. And perhaps a possible wider aim as well: to get President Obama involved.”

“…and so there was a thought that providing a strike that would assist the opposition could be an advantage and also, in Israeli calculation, help bring err.. American involvement a little closer and by pushing America towards involvement in Syria and pushing them off their red line – the American red line as you may recall was that the use of chemical weapons would be the only cause of American direct involvement.”

In the same month the then BBC Beirut correspondent promoted the notion that Israel had an “interest” in the civil war in Syria:

““Israel’s interest is to see the civil war continue and Hezbollah sucked in and massacred as it has been in the past few days, when they’ve lost 40 fighters. It’s a grinding machine, and Israel is laughing and happy.”

Indeed, put like that, it is hard to imagine Israel not being happy to see what it regards as extremists and terrorists from both the Shia and Sunni sides of the sectarian divide at each other’s throats in Syria.” 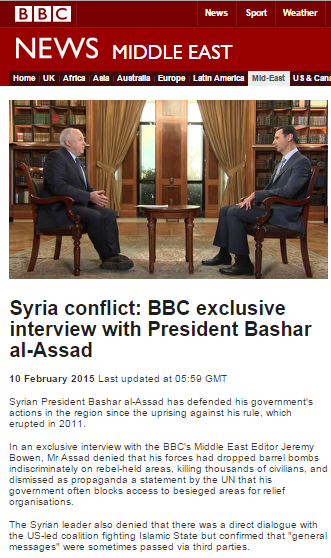 Later in 2013 the BBC’s World Affairs Editor John Simpson misled audiences on the topic of potential targets for international intervention in Syria.

In November 2014 the BBC elected to provide a platform for the messaging of the terror organization Hizballah and in early 2015 it widely promoted an equally unchallenging interview with Bashar al Assad.

In September 2015 the BBC chose to promote regime propaganda in an interview with the Syrian deputy foreign minister:

“The Syrian army has never, ever attacked or initiated any attack against a city or against a village and if you see at least the most recent attacks you will see them initiated by the terrorist factions and when these terrorist groups attack villages and cities you see a very big flood of people leaving those areas.”

The same month brought a volley of one-sided reports from the BBC’s Middle East editor who embedded with Syrian regime forces:

Bowen: “The colonel and his men say they are patriots fighting terrorists. He rejects accusations that the Syrian army targets civilians. The claim is that more civilians are killed by the Syrian army than by any other armed force here in Syria. 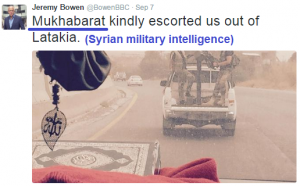 Col. Sultan: “This is all propaganda to slander the reputation of the army. It’s all lies. We were brought up not to harm peaceful civilians. We only kill people we see with our own eyes holding a weapon.”

October 2016 saw the appearance of a problematic backgrounder for younger BBC audiences.

Another notable aspect of BBC coverage of the Syrian civil war was its repeated amplification of Russian and Syrian regime propaganda concerning the White Helmets civil defence group.

REVISITING THE BBC’S AMPLIFICATION OF SYRIAN AND RUSSIAN PROPAGANDA

Also worthy of note is the corporation’s failure to address the topic of the extremist links of some of the British charities and individual activists involved in organising convoys to Syria which were promoted in various reports in 2013 and 2014.

NOT JUST ABOUT JOURNALISM: BBC EDITORIAL GUIDELINES AND THE WIDER PUBLIC INTEREST

In recent days the BBC has produced several items marking ten years since the beginning of the civil war in Syria, one of which was previously discussed here.

Unsurprisingly, none of those items include any discussion of the standard of the BBC’s own reporting over the past decade and its compliance with the corporation’s obligation “to provide impartial news and information to help people understand and engage with the world around them”.

2 replies on “Reviewing a decade of BBC reporting on Syria”